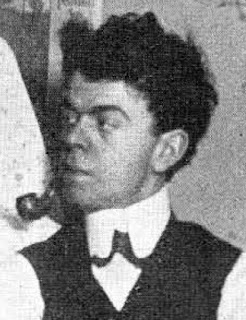 Evan Burton Johnson was born in Pittsburgh, Pennsylvania, on January 21, 1881, according to his World War I and II draft cards. Johnson’s parents were Peter and Nellie.

Johnson grew up in Bridgeton, New Jersey. The Bridgeton Evening News, May 14, 1896, said Johnson was one of twenty students to graduate from Bridgeton High School. In the graduation program, Johnson’s presentation was “One Hour in a Railway Station.”

The Evening News, June 2, 1897, said Johnson contributed a pen-and-ink drawing to the fourth annual art exhibition by pupils of Miss Brewster. The following year, the Evening News, August 30, 1898, said: “Evan B. Johnson, of the Art Department of the Philadelphia ‘Ledger,’ is at home on his vacation.”

The Philadelphia Inquirer (Pennsylvania), March 4, 1900, published a piece of verse, “My Wooing”, by E. Burton Johnson.

In the 1900 U.S. Federal Census, Johnson was the second of three children. He was a news reporter and his father was a glass blower. The family resided in Bridgeton, New Jersey. At some point, Johnson moved to Chicago.

Johnson was on the art staff of the Chicago Inter Ocean. He participated in Second Annual Loan & Sale Exhibition of the Newspaper Artists of Chicago at the Art Institute, which ran from March 9 to 22, 1903. The Muse, April 1903 reviewed the exhibition and said: “Evan B. Johnson of the Inter Ocean presents some good wash drawings…”

At some point Johnson returned to the East Coast. According to American Newspaper Comics (2012), Johnson produced Scientific Sam—Have You Met Him? for Press Publishing. The strip ran from August 16 to October 6, 1909.

Johnson married in 1909. The Evening News, September 13, 1919, recounted his marriage in its column, Ten Years Ago in Bridgeton: “Announcement was made of the marriage of…Evan B. Johnson, another Bridgeton boy, at New York, where he was cartoonist on the Journal.”

The 1910 Trenton, New Jersey, city directory said the cartoonist resided at the Lovell.

Johnson was the subject of a national news story when he was released early from prison. The Sacramento Union (California), March 27, 1914, reported Johnson’s plight.


In May, 1913. Evan Burton Johnson, newspaper cartoonist and writer running wild on a “bat,” got off a Southern Pacific train at Stockton to get a drink. He was en route from Los Angeles to San Francisco. His fare had been paid and he had a few dollars in his pocket.

On May 26, 1913, Johnson pleaded guilty to cashing a worthless check on a saloonkeeper in Stockton and was sentenced to serve four years at hard labor in Folsom prison.
On June 3, 1913, the cartoonist began a fight to establish his innocence and regain his liberty after prison doors had clanged behind him.

On March 28, 1914, tomorrow morning, Johnson will be released from Folsom prison, his sentence having been commuted by Governor Hiram Johnson.

Such is the chronology of the “black letter” days in one year of the life of a talented cartoonist and writer, well known on both sides of the continent. Johnson tells it himself impersonally. He tells how the booze “got him” and then tells of his hopes for the future.

Will Be Free Man Tomorrow.
Johnson will leave Folsom prison tomorrow morning credited with the feat of literally cartooning himself out of the penitentiary and three years of prison life. During his incarceration of less than one year he has drawn at least 200 cartoons trenchantly portraying his views of penal servitude.
His pictorial glimpses of prison life were handled with humor and satire and philosophy. None of his sketches were published, but some of the most powerful found their way to Governor Johnson’s office.

During a visit to Folson [sic] prison last winter the governor interviewed the cartoonist and was interested enough to order an investigation of his case. It was done by Martin Madsen, executive secretary of the governor and a newspaperman himself. Madsen’s investigation disclosed that the avarice of a saloonkeeper and Johnson’s drunken irresponsibility were the primary causes for the worthless check in Stockton. A commutation of sentence to one year, which with credits deducted expires today, was the result of Madsen’s report.

World Anxious to Help Him.

Johnson comes again into the world of men with a chance. He has a berth assured with a big advertising agency in Portland, Ore., and a New York theatrical promoter has offered to produce a three-act drama completed while the writer was in prison.

Johnson was busy while he he was behind the grim walls at Folsom. Several vaudeville playlets were written to supplement “The Millionaire Burglar,” an act conceived by Johnson five years ago and produced in London by Currie Stewart and later in New York.
The story of the crime for which Johnson was convicted is a sordid tale of booze and greed. Johnson was beastly drunk on the train and in bis drunken irrelevancy concluded liquor on the “valley flyer” could be improved on at Stockton. Following out this line of logic he quit the train. Two hours later, broke and boisterous, he was induced to sign a check written by a saloonkeeper, the latter volunteering to fill in the check because Johnson’s scrawl was illegible.

Of course the check was not good. It was a check on a Stockton bank—the hank patronized by the saloonkeeper. Johnson was given a chance to make the money good, but he could not. He pleaded guilty and took his medicine and then he found out just how it all had happened and began his fight.

Without money and without friends be figured the quickest way to recognition was to do the things he could do well —that is, cartoon. How well he builded was exhibited by the interest shown in the executive office and his promised release tomorrow.

The San Francisco Chronicle published Johnson’s illustrated story, “How I Cartooned Myself Out of the Penitentiary”, in five weekly installments from May 10 to June 7, 1914. 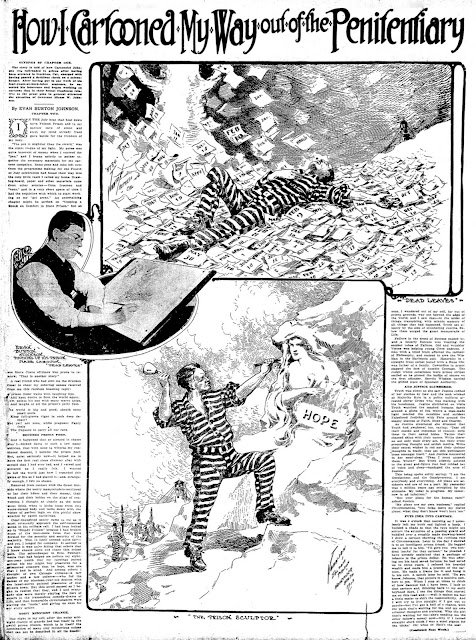 On September 12, 1918, Johnson signed his World War I draft card. He and his wife, Edith, lived at 622 West 141 Street, in Manhattan, New York City. Johnson was an artist and advertising writer at Continental Illustrating Company, 2 Rector Street, New York City. His description was tall, medium build with blue eyes and gray hair.

The 1920 census recorded Johnson and his wife in Brooklyn on Bedford Street. He was the proprietor of an advertising company.

The Bronx was advertising writer Johnson’s home, at 1800 Popham Avenue, in the 1925 New York state census.

Johnson was a manager in an advertising company as recorded in the 1930 census. He and his wife were at 52 Sherwood Place in Greenburgh, New York.

In the 1940 census, Johnson lived in Brooklyn at 61 Poplar Street. The census indicated the advertising writer was married but it was crossed out. The status of his wife in not known. Johnson’s address was the same on his World War II draft card which said his freelance advertising company was at his home. Johnson named Mrs. Earl Heins of Philadelphia as the person who would always know his address.