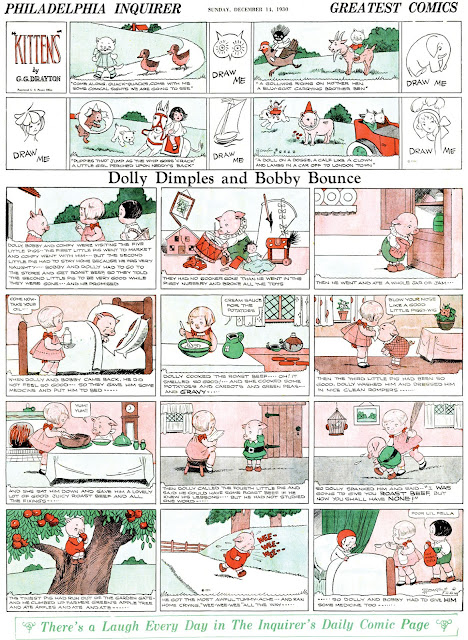 Grace Drayton was past her greatest days as an illustrator in 1928 when she created for King Features yet another version of her familiar Campbell Soup kids, this time calling them Dolly Dimples and Bobby Bounce. Considering that some of her previous series were titled Dimples, Dolly Drake and Bobby Blake and Dottie Dimple, her fans were well-assured that they were getting more of the same cherubic little tykes in gentle fairy tale-inspired adventures.

The Sunday page was added around January 1929 (can anyone supply a definite start date?) and sported a topper strip titled Kittens. Basically, Drayton added whiskers and furry ears to her standard cherubs, and voila, a topper was born.This strip ran until the end of the Sunday page itself, which I can track as far as April 2 1933, but perhaps it ran longer though, as this strip was in mid-story.