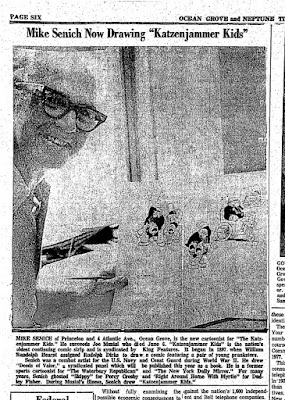 In the 1920 census, Senich was the sixth of nine children born to Onufer and Anna, both Austrian emigrants. The family resided in Waterbury at 88 Hill Street. The address was the same in 1930.


Senich began his artistic career in his home town of Waterbury, Conn., while he was still in high school. An avid sports enthusiast and baseball player, he freelanced sports cartoons to the Waterbury Republican.

He continued to work full-time for the Republican for two years after graduation, occasionally turning out political cartoons as well. Then came his first “good break” when he landed a job as a staff artist on the New York Mirror.

The 1935 Waterbury city directory listed Senich’s mother was a widow who lived at 88 Hill Street. “Michael Ksenych” had the same address and was a watch maker at the WC Company. 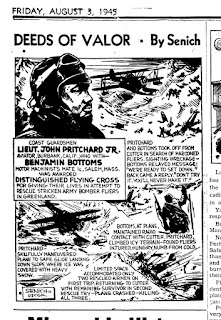 
He enlisted in the Coast Guard during World War II and was loaned to the Navy, where he created the syndicated feature “Deeds of Valor,” depicting heroic acts by soldiers and featured in over 200 newspapers.*

The Arts Digest, October 1, 1944, reported the National Gallery of Art, in Washington, D.C., exhibition of paintings and drawings by Coast Guard combat artists which included Senich.

After the war, Senich returned to Connecticut. Who’s Who of American Comic Books 1928–1999 has an overview of Senich’s contributions. A detailed list of Senich’s comic book work is here.

Around 1951, Senich became a staff artist with King Features. American Newspaper Comics (2012) said Senich was a ghost artist on the Katzenjammer Kids, Right Around Home with Myrtle, and Skippy. The Evening Times said Senich also ghosted Pete the Tramp. At the time of the Evening Times article, Sencih developed a new comic strip called Jim Dandy, which was copyrighted in 1965:

Senich was one of several combat artist whose name was entered into the Congressional Record, June 27, 1995. The artists’ work was exhibited at the National Building Museum in Washington, DC..

* note from Allan -- Deeds of Valor was indeed offered to newspapers, but it appears to me that the panels were free handouts offered by the Coast Guard. Even free, they did not seem to get much ink from newspapers, though they were very good patriotic capsule histories of Coast Guard heroes. The Sikeston (Mo) Standard ran a total of 7 panels over a period of six months in 1945, while the only examples I could find in the two other newspapers that came up in search results were single examples, obviously just run to fill a hole.

Comments:
A 1960 interview with Senich has him saying he ghosted the Katzenjammer Kids for Doc Winner for two years, before taking over Myrtle "five years ago".

The article reports that he joined the New York Mirror as sports cartoonist in 1936.

After three years in comic books, he went into advertising. He was working in Boston advertising before joining King Features in 1951.

He was living in Forest Hills in 1959 before moving to Kendall Park, New Jersey.

Finally, Deeds of Valor was supposedly syndicated (given?) to over 100 papers. Seems that probably an overstatement.

PS -- Senich also reported to be an uncle of Bob Crane of "Hogan's Heroes"!

Thanks Michael; could you tell me where that interview appeared for my records? Thanks, Allan