Wish You Were Here, From Outcault 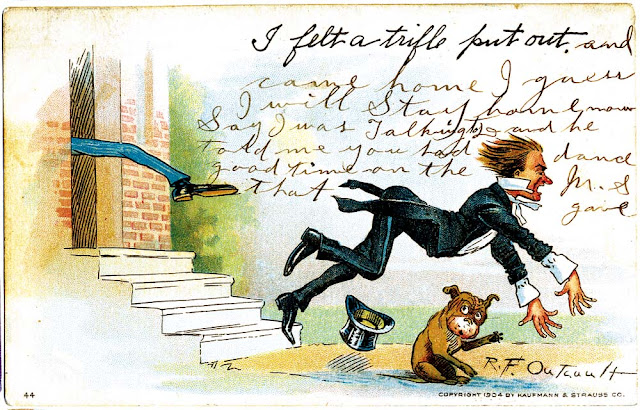 Lately, Friday has been the blog's book series day. However, we're going to put that series on hiatus for awhile. Main reason for that is that I am far, far away from my library, and access to books of interest that have already been digitized has petered out. For the record, I'd like to run Moses Koenigsberg's King News here, and John Wheeler's I've Got News For You. If anyone out there feels like doing a major OCR project, I will of course be thrilled and forever in your debt for sharing.

So I was looking around for a new Friday series idea, and found that I had scanned a whole batch of cartoonist postcards. That was a collecting genre that I long ago abandoned after I realized that a lifetime could be spent concentrating on just that small niche.  The art is often lovely, though, printed very well in general, and sometimes shows a different side of the cartoonists whose newspaper work we know far better. So I think it worthwhile to share. Thus is born the new Friday series I'm titling, perhaps too cutely, Wish You Were Here from the Cartoonists.

In this first installment of the series we have a nice R.F. Outcault card with a witty gag line. Outcault did a ton of cards and they're pretty common, indicating that they were quite popular. Of course Buster Brown was often featured. In this 1904 card, which is numbered 44 and copyrighted to Kaufmann & Strauss Co., Tige makes a background appearance, but Buster Brown is nowhere to be seen. This is an undivided back card, and is set up for the message to be written on the front. Our postcard purchaser used the gag line to start his or her message, and though I can't make out all the words, it certainly gives the impression that the gag line provides an excellent title for the writer's state of mind.

I don't claim to be any sort of expert on postcards, so if anyone would like to fill us in on the companies, series or other background on these cards, I'm sure we'd all be interested to learn more.