After a long hiatus, Heritage Auctions has included some more items from my collection in their latest auction. There are some pretty special items in this one, some of which I believe will be of great interest to Stripper's Guide readers. Many of these items they failed to properly describe or highlight, so that blog readers should have a good chance at picking them up inexpensively.

To see all my items on Heritage's website, follow this link. Here are the auction items and my comments: 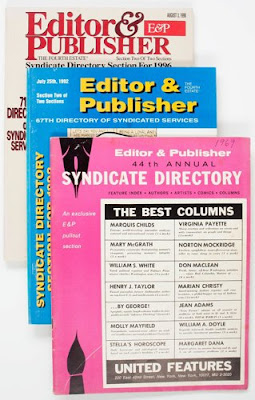 These annual books are extremely scarce. I buy them whenever I find them, yet my collection is still missing dozens of the annual issues, for which I am forced to rely on really bad microfilm copies. 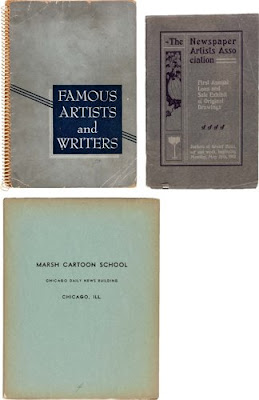 An oddball but fabulous conglomeration here. First up is Famous Artists and Writers, an incredible spiral-bound book sent to newspaper editors as a promo by King Features in 1946. It offers samples of all the comics they offer (quite a few in glorious glossy color stock), along with bios of the artists. These are tough to come by and highly prized.

Next is an incredible rarity from 1902 -- a catalog from a cartoon exhibition and sale -- perhaps the very first in history! Would you like to buy a Winsor McCay original? No problem, there were something like 50 different examples up for sale in this exhibit. What an amazing document that shows cartoon art taken seriously so early.

Here's another odd but delightful assortment. Three issues of Crapouillot, a French political humor magazine with superb illustrations and cartoons, plus a couple issues of New Masses with those terrific leftist cartoonists represented (one is a special expanded anniversary issue), a rare issue #2 of Americana, a 1932 satire magazine with an amazing high-end list of cartoonist and writer contributors, plus an issue of Touchstone, the humor magazine of Amherst College. 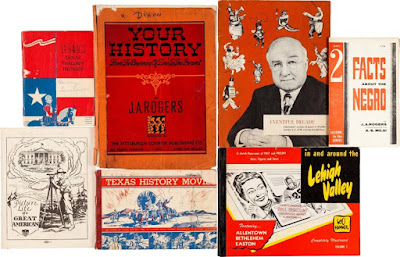 Yet another assortment of wonderful goodies. First and foremost, an original edition copy of Your History by J.A. Rogers, the black historian who authored the weekly cartoon panel series for black newspapers from the 1930s to 1960s. In the same vein, there is also Facts About the Negro #2, a later reprint book of the Your History cartoons. Next up is Eventful Decade, which is a real sleeper item -- this classy booklet was issued by the American Federation of Musicians in 1952 and features a retrospective of political and humor cartoons related to their profession from the mainstream press; lots of interesting material and neat jazz music references of course. Next we have two different editions of Texas History Movies (1935 and 1959), which we've discussed on the blog. Next there is Picture Life of a Great American, a very scarce comic strip reprint book detailing the life of Herbert Hoover (an election giveaway), and finally, In and Around the Lehigh Valley, a book of cartoons about eastern Ohio by Leo Hammer. 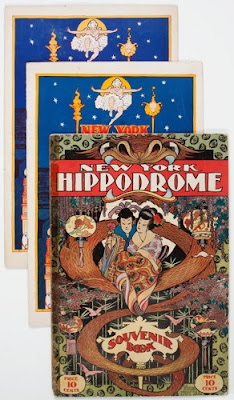 For two glorious seasons, Winsor McCay contributed the covers for the New York Hippodrome's annual souvenir books. In this lot, much to my chagrin, the auctioneers have included two (!) copies of the scarcer 1908-1909 edition, along with one copy of the 1909-1910 issue.

In the realm of rare platinum comics, Buttons and Fatty in the Funnies rates at the high end for scarcity. This is the only copy I've ever encountered. Condition isn't the greatest (the original binding was ridiculously fragile and doomed from the start), but as the saying goes, where you gonna find another one? 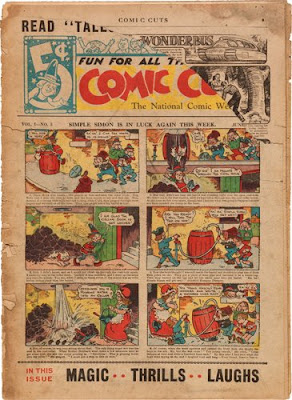 Another ridiculously rare platinum comic, Comic Cuts is all but unknown to collectors. My guess is that its rarity is even greater because when copies are found, they are often mistaken to be from the British series of the same name. But these rare issues came out of New York, and contain all original material, which makes them among the earliest original comic books ever published (along with The Funnies, below). This is issue #5. Though it has a good size hunk out of the front cover, the same admonishment applies -- where you gonna find another one! 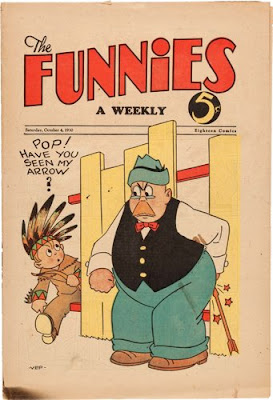 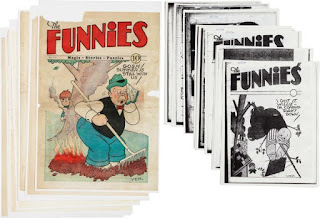 We've discussed the 1929-30 series The Funnies on the blog at length, and here is the only original issue from the series (10-4-30) that I had in my collection. As a major bonus, included is a big batch of photocopies, some in color, of other issues from the series. The Funnies is pretty much without a doubt the earliest regularly issued original material newsstand comic book series, and issues are beyond rare. Don't miss this rare chance to get an issue plus a lot of bonus material. 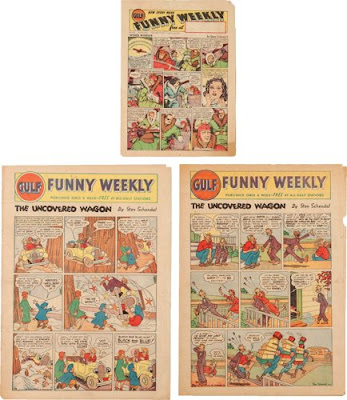 Three issues of Gulf Funny Weekly, the gas station giveaway series with some great newspaper comics-style art and stories. Issues in this lot are #38, 56 and 319. 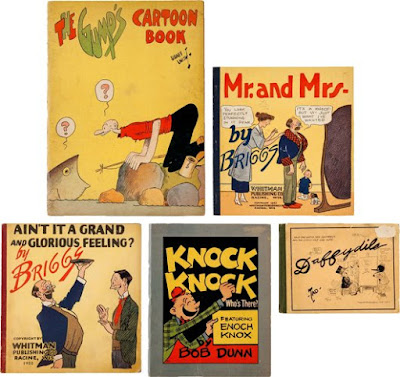 A nice batch of Cupples and Leon platinum comics in lesser condition, featuring some of the harder to find issues: Harold Teen, Keeping Up With the Joneses #1 and #2 (by Pop Momand), Percy and Ferdie by the great H.A. McGill, and Tillie the Toiler #2 and #4. 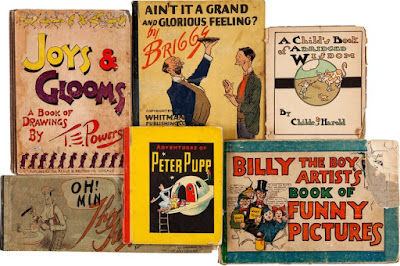 Some absolutely great material here in this lot! T.E. Powers' Joys and Glooms is very tough to find, and expensive if you do. Landfield-Kupfer's very early reprint of The Gumps is also very tough to find, though this copy is in rough shape. Also a tough book to find is Billy the Boy Artist's Book of Funny Pictures as it was probably only sold in the Boston area -- this one is also quite rough.

Much lesser known is A Child's Book of Abridged Wisdom, which is by the naive cartoonist Childe Harold. His work appeared often in Hearst's New York American in the 1900s.

Another really special item, though, is The Adventures of Peter Pupp, which isn't a platinum book at all. It's also not rare, but somewhat tough to find in decent condition It was issued in 1943 by comics pioneer Jerry Iger though his Action Play-Books imprint. The fantasy/sci-fi story is by comic book scripter Ruth Roche, and the illustrations are uncredited. The exciting thing, though, is that those cartoons are adapted from a comics series by none other than a very young Bob Kane! Iger recycled Kane's art for this kid's book and didn't give him any credit. 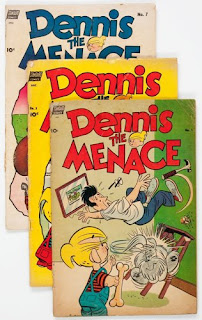 Getting into the comic book end of things, we have two whopping big lots of early Dennis the Menace comic books (one batch from the regular series, the other from the Giant Size series). I collected these back in the 1970s when I was absolutely loopy in love with the art of Al Wiseman, whose art graces most of these issues. I just couldn't get enough of his work. I don't know if Wiseman has ever gotten much fan press, but I think he's a most incredible stylist. 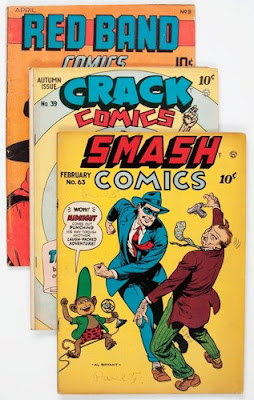 There are three groupings of miscellaneous golden age comic books in the present auction, but they didn't even bother to picture many of the issues. I understand why they look down their noses at these I suppose -- condition is generally merely average -- but there are some wonderful seldom seen issues mixed in. I hope you comic book fans will take a look at these: 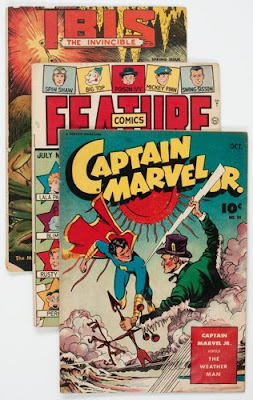 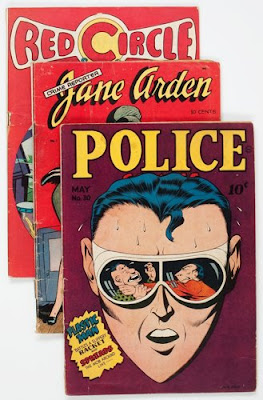 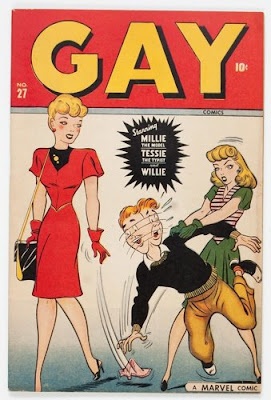 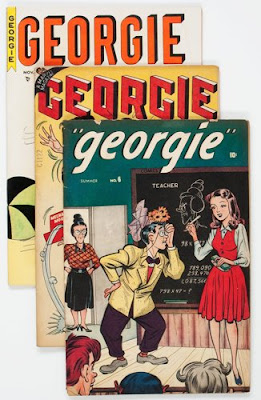 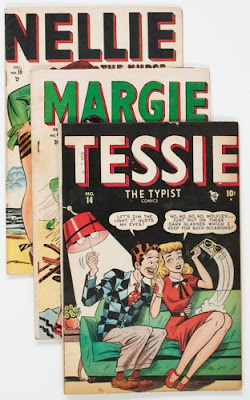 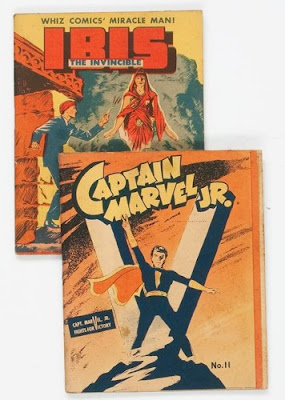 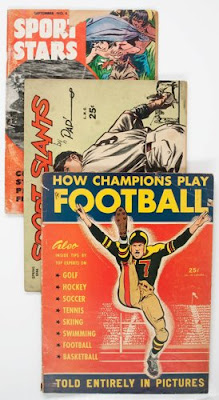 Three very uncommon sports-related comic books; Sport Stars #4 is the only one that Overstreet even knows about. How Champions Play Football is so obscure that GCD doesn't know about it either -- they only list the companion baseball issue. Sport Slants is a real gem containing sports cartoons and caricatures by famed sports cartoonist Tom 'Pap' Paprocki, and seems to have been issued by his syndicate, the Associated Press. It must have sold terribly at 25 cents in 1946! 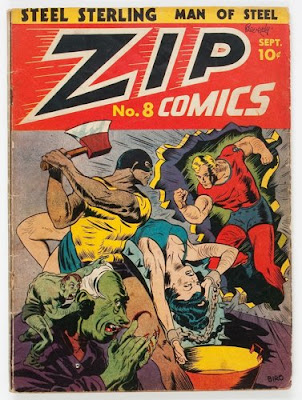 We finish off with Zip Comics #8, featuring an incredibly gruesome cover from the pen of Charles Biro. Inside art by Mort Meskin and others.

Comments:
I've never put anything up for auction. From what you've written, it sounds like you have no input over what is sold or what the starting bids are. Do you basically just give the auctioneers a pile of stuff and they decide how to dispose of it?

In the case of Heritage Auctions, yes. At least that's how they are handling my collection. I gave them inventory lists with some very abbreviated information about items, but I left it to them how they wanted to divide things up into lots, and everything starts at $1, no minimums.

Generally I'm happy with how they've been handling things, but when they get into the more obscure and rare items, they seem to sometimes be in over their heads. I do get to see the auction listings before they go live, and in the past they've for the most part responded when I belly-ached about something being mis-described or in an inappropriate lot combination. On this batch my requested changes were ignored -- including ridiculous errors like the misspelling of Winsor McCay's name. So I have to admit I'm a little tweaked off at them this week.