Wish You Were Here, From Dwig 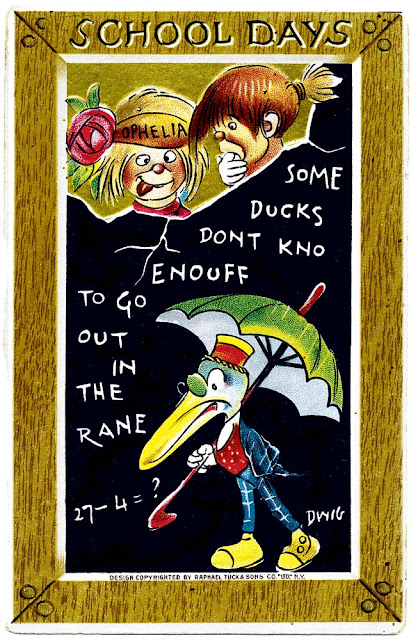 This undated divided-back postcard by Clare Victor "Dwig" Dwiggins, is from a series called School Days, aka Series #170, by Raphael Tuck. These postcards were of course based  on one of Dwig's most enduring newspaper comics series, School Days, which was popular in various guises and titles from 1909 through the 1920s.The one constant in these newspaper comics was Ophelia, the little girl with the protruding tongue, and her school slate, on which she wrote funny sayings. The postcards use this motif and add some high-end features -- embossing and shiny gold ink -- to make a very attractive package. This particular example was never used.

Comments:
You've run several of the "School Days" in the past. A central gag is the beautiful teacher ignoring the students while the smitten three-man school board hangs around her. She was a caricature Gibson Girl, with gigantic hair and flowing dresses.

You mentioned the strip lasting into the 20s. Did she adapt to Jazz Age fashions? Do you have any samples?

If you can, please post the back of the postcards as well. That can often give important information about the card - how it was distributed, who produced it (not always the copyright holder) and for a used card, a date.

Hi Donald --
The later Dwig series (then known as School Days of Tome Sawyer and Huckleberry Finn) did not generally feature the beauteous teacher, I'm sorry to tell you.

Hi Frank --
I would be delighted to do that, but these are old scans I made years ago, and the actual postcards are buried somewhere in deep storage, currently unavailable. I only have basic info about the reverses because I jotted down a few notes at the time.