Ving Fuller was born Isaac Filler in Kisselynn, Russia, on March 17, 1903, according to the Immigration and Naturalization Service form, Declaration of Intention, which was filed in Los Angeles, California, on August 4, 1941. The form said Fuller was a newspaper cartoonist who had sailed aboard the S.S. Canada from Liverpool, England. He arrived in Portland, Maine, on January 15, 1913. 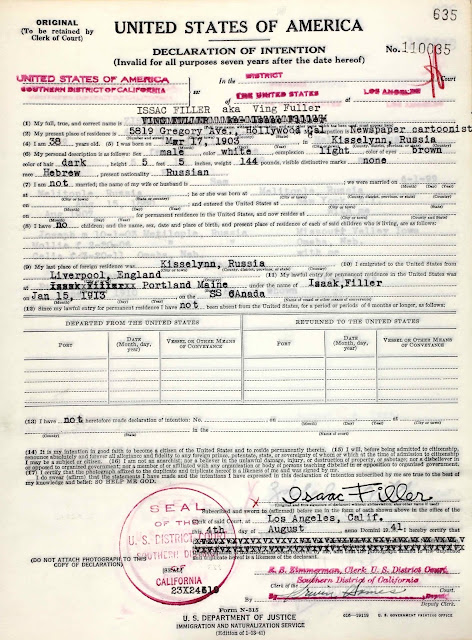 The passenger list recorded Ving as Isaak (11), his mother, Rebecca (38), and siblings, Ester (12), Taabe (9), Rahmann (6) and Michal (1.5). Written in column twelve, Final Destination, was Worcester, Massachusetts. The family was going to join “B. Filler 45 Providence St. Worcester, Mass.” according to column eighteen. The last column, number twenty-nine, said the entire family was born in “Wladimir, Russia”.

The 1914 Worcester, Massachusetts, city directory listed Ving’s father, Benjamin Filler, as a laborer residing at 90 Water. Benjamin signed his World War I draft card on September 12, 1918. His residence was “21 Waverly St” in Worcester. 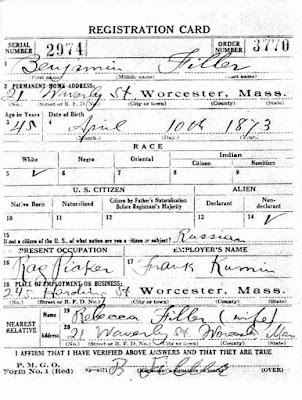 The same address was found in a 1919 city directory and the 1920 census. The Filler household included Benjamin, Rebecca, Esther, “Tena”, Thomas, Samuel and Raymond. Ving has not yet been found in the census.

One of Ving’s younger brothers was the screenwriter and film director, Samuel Michael Fuller, who said he was born on August 12, 1912, in Worcester, Massachusetts, according to the book, A Third Face. Samuel identified his parents, Rebecca Baum and Benjamin Rabinovitch, who later changed his surname, and siblings, “my brothers, Ray, Tom and Ving, and my sisters, Evelyn, Tina and Rose”. Evelyn was Esther in the census. Rose was married to William Epstein, a taxicab driver, and had a seven-month-old daughter, Edith. The Epsteins lived in Worcester at 106 Lincoln Street.

The census said the Fillers were born in Russia except Raymond whose birth was in Wisconsin. It’s not clear if the entire family or just the parents were in Wisconsin. Samuel said he requested a copy of his Worcester birth certificate.

The Fillers’ residence in the 1921 Worcester city directory was 5 Mott Street. 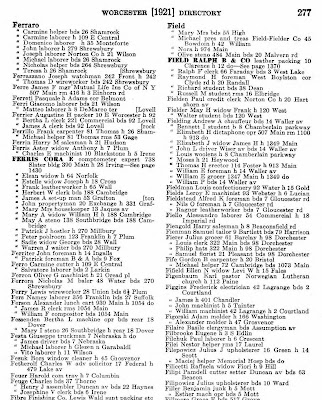 Samuel said his father passed away when he was eleven. The family moved to New York City and settled in Manhattan’s Upper West Side on 172nd Street. The family and Ving have not been found in the 1925 New York state census.

Ving’s brother Samuel also worked for the Graphic. In the mid-1930s, Samuel moved to California and started a career in filmmaking.

Ving has not been found in the 1930 census. His mother and brother Raymond had the surname, Fuller, and lived with Rose’s family in Queens, New York, at 3825 56th Street. Rose’s second child was Stanley.


A portrait of assorted contented cows, executed by Mr. Ving Fuller, the club's artist, was unvealed [sic] shortly before the dinner.


An interesting exhibition of sketches of officers and members of the Woodmere Country Club by Ving Fuller, former cartoonist for a number of metropolitan newspapers, is now being held in the lobby of the clubhouse. The cartoons are embellished with biographies of the subjects—including their idiosyncrasies and talents. Among the portraits on display are those of Supreme Court Judge Clarence G. Galson, Lewis J. Robertson, president of the club; Timothy McCarthy, Oscar Seagar, William Meissel, Harry Ackerman, William Wolff and Ellis H. Wilner. 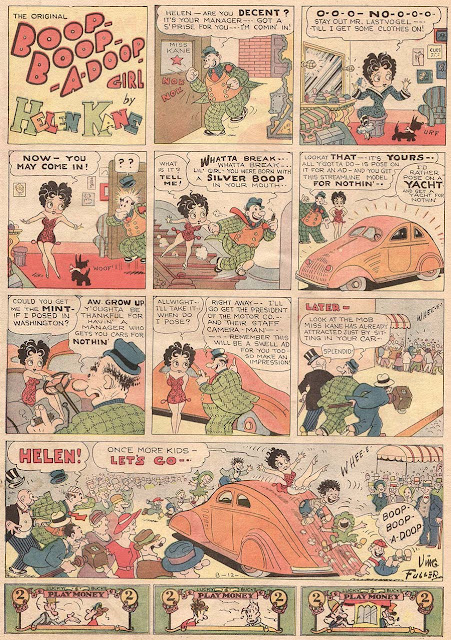 
Ving accepted me, probably because he had few friends. He was at least 25 years older than I and bitter that he had been reduced to ghost-drawing a comic strip called Joe and Asbestos for Ken Kling. The feature enjoyed its popularity on sports pages because each day’s strip contained a horse racing “best bet.” Kling was not much of an artist but he was a respected handicapper.

Back in New York City, Kanter told about a chance encounter with Ving.


Ving Fuller approached me sheepishly on Seventh Avenue and asked it I could afford to buy him a hot dog. He told me he was unemployed, broke, alone. He was remorseful about his treatment of Bert and me in Hollywood….

At the time, Kanter was hired to write Ole Olsen and Chic Johnson’s Eliza Poppin. Meanwhile, King Features searched for an artist. Kanter explained what happened.


Ving’s name was, of course, known to the editors at King, and when I urged Ole to give him a shot at the strip, he agreed. Ving quickly drew three or four different faces of “Eliza.” Ole, Chic and Dick Hyman of King Features picked one. I typed out a week’s worth of comic strip dialogue, advanced Ving money to buy a Whatman board, India ink, pens and gum erasers and production began on Eliza Poppin. Ving’s work was fast, crisp, funny and quickly accepted by newspaper editors. The strip got off to a flying start….

American Newspaper Comics said Ving drew the strip from June 19, 1939 to January 6, 1940. It was continued by George “Swan” Swanson.

The Brooklyn Daily Eagle, November 10, 1939, reported the cartoonists’ contributions to a Chinatown restaurant.

Ving has not been found in the 1940 census. His mother and brother Raymond, a cafeteria worker, lived in Manhattan at 336 West 95th Street. The date of his mother’s passing is not known. Raymond moved to Los Angeles where he died October 22, 1957. Samuel, a writer, lived in Los Angeles at 2050 1/2 Ivar Avenue.

At some point Ving returned to California and in 1941 filed, in Los Angeles, to become a naturalized citizen.

During World War II, it was the City of Angels where Ving enlisted in the army on November 10, 1942.

It’s not known when Ving was discharged from the army but he was in New York City when his naturalization was approved October 15, 1943. This was about six weeks after his mother was naturalized on September 2 in New York City. 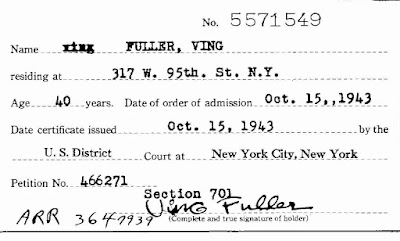 Ving’s longest running strip was Doc Syke, from January 8, 1945 to 1960, according to American Newspaper Comics. It also appeared in comic books. Later, Ving changed the title to Little Doc and distributed it through his Ving Features Syndicate.


Be it known that I, Ving Fuller, a citizen of the United States, residing at 4546 Stem Ave., Sherman Oaks, in the county of Los Angeles and State of California, have invented a new, original, and ornamental Design for a Toy Bank or Similar Article… 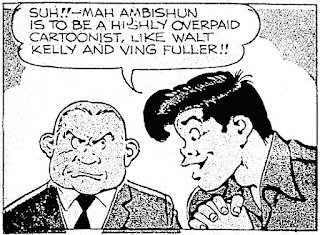