Becky Sharp was the pseudonym of Helen Augusta Sharp who was born in St. Joseph Township, Ohio, on April 22, 1890 or 1891. Her birth information was found at Ancestry.com in the Ohio, Births and Christenings Index that spelled first name “Hellen” and said her birth year was 1891; her Social Security application had the same year. The year 1890 is from the 1900 U.S. Federal Census, the California Death Index and Find a Grave.

In the 1900 census, Sharp was the fifth of seven children. Her father, Herbert, was a farmer; her mother was not recorded. The family resided in Edgerton, St. Joseph Township, Williams County, Ohio.

Sharp graduated from Edgerton High School in 1908. The Edgertonian 1915 yearbook listed many of the alumni and their occupation. Apparently, Sharp was unemployed at the time.

The 1910 census revealed that Harding had been named after her mother. The family of six continued to reside in Edgerton.

The Bulletin of DePauw University, May 1910, listed Sharp as an undergraduate. She was in the class of 1914.

At some point Sharp moved to Los Angeles, California, where she continued her studies at the University of Southern California.

The 1920 census recorded Sharp in the household of a cousin. Self-employed Sharp resided in Los Angeles at 726 East 31st Street. Her occupation was advertiser for a store.

According to Who’s Who in California, Cynical Susie began in 1930 in the Daily News. The Catalog of Copyright Entries, Part 4, Works of Art, Etc., New Series, Volume 27, 1932, Number 1, had this entry: 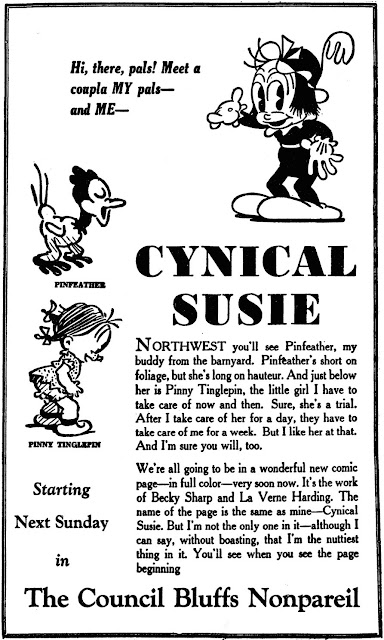 American Newspaper Comics (2012) said United Features Syndicate picked up the strip for national syndication in 1933. Cynical Susie was written by Sharp and drawn by LaVerne Harding who stayed with the strip into September 1935. In January 1936, Bernard Dibble did the art and writing chores to August 7, 1937.

The Spring 1994 issue of Animation Journal revealed a contract that named a third person, O. Jean Brittan*, who was involved in the ownership of Cynical Susie. It’s not known how or when Harding, Sharp and Brittan met and became partners in the Cynical Susie property.

A 1938 Pasadena, California city directory listed Sharp, a writer, at 4336 Bel Air Drive. The same address was in the 1940 census. Sharp lived with her younger sister and two nieces.

Sharp has not yet been found in the 1940 census. A listing in the 1946 Crescenta and Canada Valley, California, city directory said Sharp was a writer at 1250 Olive Lane.

Later, Sharp was involved in real estate according to the California Directory of Brokers and Salesmen, Volume 37, 1956.

Sharp passed away September 1, 1961, in Los Angeles. She was laid to rest at Union Cemetery in Bakersfield.


* Olive Jean Brittan was born November 11, 1888, in Corning, Iowa, according to a 1925 passenger list. The 1900 census recorded Brittan as the sixth of ten children. The family of twelve resided in Douglas, Iowa. Brittan’s home in 1910 was Montana where she was unemployed. The Anaconda Standard (Montana), May 11, 1913, said Brittan was elected president of the girls’ auxiliary of the Bozeman Woman’s Club. A 1914 San Pedro and Willmington, California city directory listed Brittan as a dressmaker at 634 North Alexandria Avenue. Brittan graduated from the State Normal School in 1917. The 1920 census said Brittan was a teacher at a business college and a Glendale resident. Brittan contributed to the Los Angeles School Journal, January 10, 1922. Brittan’s address in 1925 was 921 West 20th Street, Los Angeles. In 1930, Brittan made her home at 3321 1/2 Griffith Park Boulevard in Los Angeles and was a secretary at an office building. At some point Brittan met Helen Sharp and LaVerne Harding. Brittan was found in a 1942 Bakersfield, California city directory. She was a public school teacher. Brittan and Sharp were listed at the same address, 1250 Olive Lane, in the 1946 Crescenta and Canada Valley, California city directory. Brittan was an office manager. Next, Brittan went into real estate as a salesperson. Brittan passed away June 3, 1949, in Los Angeles and laid to rest at Union Cemetery, Haven of Rest 776 - 7 Head. Sharp was at Haven of Rest 776 - 7 Foot. 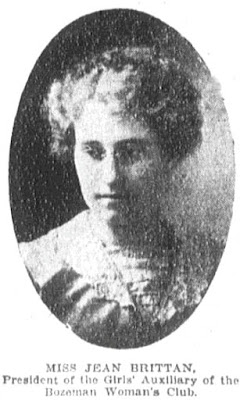