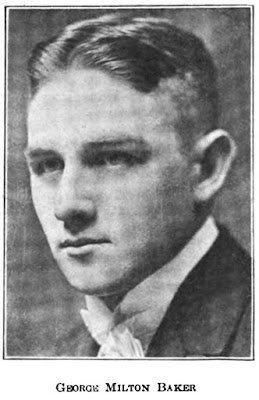 George Milton Baker was born in Johnstown, Pennsylvania, on September 10, 1896, according to his World War I Veterans Service and Compensation File at Ancestry.com. Baker should not be confused with George Baker who created Sad Sack.

Baker has not yet been found in the 1900 and 1910 U.S. Federal Censuses. Baker’s file said his parents were John Milton Baker and Elizabeth Jones, whose Social Security application said her middle name was Ann.


We are told that school is a great place to acquire knowledge. George Milton Baker didn’t get the knowledge to earn a livelihood from books, however—or at least not much.

“I liked books, but the covers only,” he says.

That is one of the reasons why George is staff cartoonist on the Pittsburgh Post to-day.

Countless numbers of times George went home from his studies nursing burning fingers, which had been struck with a ruler in the hands of a stern teacher, just because he spent study time “decorating” the covers of school-books with with crude-looking dogs, cats, and sometimes men and women. “I couldn’t help it, no matter how often I was chastised,” quoth George, “because I loved the work.”

One day he was graduated with the rest of his class, but why was a mystery to him. Then the long looked-for day arrived when he could go out into the world and earn a living with his pen brush and crayons.

His first job was a scenic artist, and not long after he became engaged by department stores as a commercial artist. This kind of work was not altogether to his liking, so it took him but a short time to land a job on the Post, where he made sport cartoons. Later he entered the syndicate game, making sports and comics. Many papers have used his original strips, especially those of “Little Julius Sneezer” and “At’a Boy, Aggie.”

Baker joined the navy last May (1918), and during his service was sporting editor and staff cartoonist for the “Navy Life” magazine at Hampton Roads, Va. A short time after the armistice was signed he was released from the naval service, and took up his duties on the Post again.

The author of “At’a Boy, Aggie,” “Little Julius Sneezer,” and other strips, is a great dissipator. He indulges in baseball, tennis, and other sports, and when the Pittsburgh team plays in its “own home town,” the managing editor of the Post always knows where to find George....

The service file said Baker enrolled at the navy recruiting station in Pittsburgh, Pennsylvania on May 3, 1918. His home address was 329 McKinley Avenue in Pittsburgh. From June 8 to November 11, 1918, Baker was at the naval training station in Hampton Roads, Virginia. Baker was released December 20, 1918 and honorably discharged September 30, 1921.

Baker spent some time in New York City as reported in Editor & Publisher, December 8, 1917: “George M. Baker, sports cartoonist of the Post, has entered Columbia University, New York, for training as a scenic artist in the American Camouflage Unit.” 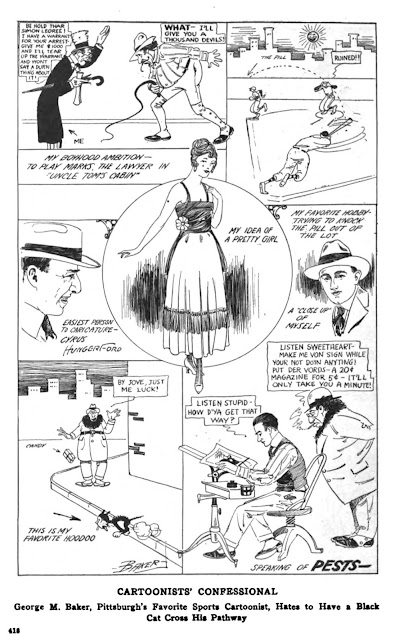 The Fourth Estate, July 26, 1919, said “George Milton Baker, for several years sports cartoonist for the Pittsburg Post, whose cartoons, “Little Julius Sneezer,” “Atta Boy Aggie” and “Tommy Rott,” together with syndicated sports cartoons and other features, have appeared in papers all over the country, is leaving the Post and will cater to syndicate work entirely.”

The 1920 census recorded artist Baker, his parents and maternal grandfather, Elias W. Jones, at 329 McKinley Avenue in Knoxville, Pennsylvania. His father was a collector for a newspaper.

Sometime in the early 1920s, Baker married Palma Jean whose maiden name is not known.

Baker had an entry in the directory, Advertising Arts and Crafts (1927).

The 1930 census listed Baker, his wife and his two daughters in Miami, Florida, at 1460 S.W. 5th Street. Baker did advertising soliciting for a public utility.

In summer 1932, Baker and his wife visited Cuba, according to a passenger list at Ancestry.com.

According to the 1940 census, the Baker family continued to reside in Miami but a different address, 332 S. W. 31st Road. Baker, who had two years of college, did advertising for the public utility. Baker’s World War II draft card identified the utility as Florida Power and Light. Baker’s description was five feet seven inches, 160 pounds with blue eyes and brown hair.

The 1945 Florida state census said Baker’s address was the same and he worked in advertising.

The Seattle Times (Washington), April 23, 1947, reported the marriage of Baker’s daughter, Dorothea, to Raymond Lee Pearson whose mother lived in Seattle. Baker was a resident of Coral Gables, Florida, where the newlyweds will live.

Baker passed away December 8, 1988, in Dade County, Florida, according to the Social Security Death Index. His wife passed away in 1993.

[Allan asks that if anyone can locate the above mentioned Tommy Rott or Atta Boy Aggie  strips, he'd sure like to hear from you]

Comments:
Fascinating. A George Baker cartoonist I had never heard about.

I've read about a George Baker who worked as the Promotion Manager at the McClure Syndicate back in the mid-30s. He also wrote and drew a comic strip for McClure called "From the Notes of Maj. Cosmo Strange, D.S.O." The strip was almost entirely text with just an illustration or two thrown in- unsurprisingly, it flopped.

In May or June 1936, George Baker quit his job at the McClure Syndicate and started the difficult life of a freelance cartoonist. I think he considered moving out West for a job with Disney, but I don't know if he ever acted on that.

Do you know if this is the same cartoonist who went on to create Sad Sack? Or did he just disappear into obscurity?