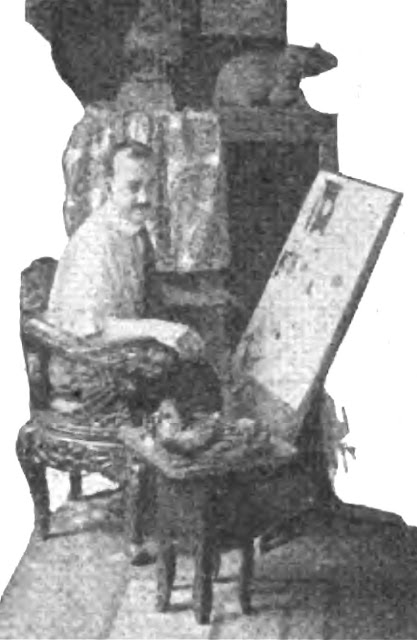 Marion T. “Penny” Ross was born in Illinois on June 6, 1881. The birth date is from his World War I draft card. According to the 1880 U.S. Federal Census, Ross’s parents and four older siblings resided in Galesburg, Illinois, on Cherry Street. It seems likely Ross was born in Galesburg. Records at Ancestry.com show that his father was a Civil War veteran who enlisted in the Wisconsin 5th Light Artillery Battery on December 7, 1861, and was mustered out June 6, 1865.

According to the 1900 census, student Ross resided in Cicero, Illinois, with his parents, two sisters, a brother and niece. His father was a salesman.

The Oakland Tribune (California), July 7, 1937, said Ross was a “graduate of Chicago art schools and a former instructor at the Louis Art Institute, in Chicago.”

The Cook County, Illinois, Marriages Index, at Ancestry.com, recorded Ross’s marriage to Myrtle May Barnard on April 2, 1907 in Oak Park.

In the 1910 census, newspaper artist Ross and his wife lived in Chicago at 5911 Frink Street.

The origin of Mamma’s Angel Child was told by Ross in a Chicago Tribune advertisement published in Editor & Publisher, May 1, 1919.


Ten years ago Penny Ross was a young illustrator on the Chicago Tribune doing a few fashions and miscellaneous routine drawings. An artist doing a page for the comic section, died suddenly and the gap had to be filled. Ross was asked to attempt something. One of the greatest influences in his life had been a little girl in the neighborhood named Esther, whose pranks had been startling in their number, originality and lack of malice. He began drawing the actual events in which Esther had been the heroine…. 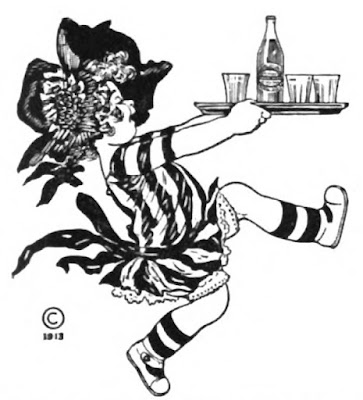 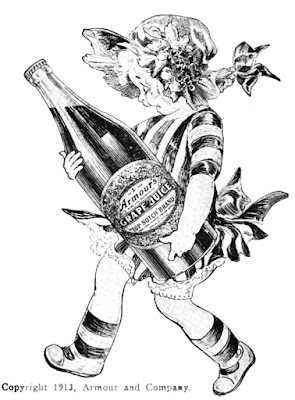 Ross also illustrated the Armour’s Grape Juice advertisements as seen in The Saturday Evening Post, August  9, 1913, and Collier’s, May 16, 1914.

On September 12, 1918, Ross signed his World War I draft card. The Chicago Tribune cartoonist resided at 416 Wesley Avenue in Oak Park. The same address was in the 1920 census that said Ross had a son and daughter.

Bill Blackbeard wrote in his book, Smithsonian Collection of Newspaper Comics (1977), that Ross “assisted Outcault on Buster Brown and possibly ghosted that strip on occasion.” It’s not clear when Ross met Outcault. American Newspaper Comics said Ross worked on the Buster strip (late in its run) when it was syndicated by the American-Journal-Examiner. (The National Corporation Reporter, February 21, 1907, had this entry in the New Corporations column: “Outcault Advertising Company, Chicago; $6,000; Clark S. Reed, C. N. Goodwin, James M. Given.” Outcault traveled from his home in New York City to Chicago where he developed licensing merchandise for Buster Brown as well as other advertising projects for clients. Outcault died in 1928.)


A 1922 Oak Park city directory listed commercial artist Ross at 531 South Elmwood Avenue. According to trade magazine The Shears, Ross was the art director at Artcraft Paper Box Company in Chicago. The Shears, June 1922, said Ross appeared with the W.C. Ritchie & Company at a trade show.

The Oakland Tribune said Ross moved in 1926 to California.

Ross lived in Oakland, California, at 473 College Avenue, as recorded in the 1930 census. Ross was a self-employed artist who worked on private homes. The Oakland Tribune said “Ross planned the interiors of many large homes in the Bay area. He was called as a consultant for the Century of Progress Exposition at Chicago and recently had done designing for Hollywood studios.”

Lambiek Comiclopedia claims Ross “was one of the first co-workers of Walt Disney”. Disney moved to California in 1923. Other biographies of Disney make no mention of Ross.

Ross passed away July 6, 1937, at his home in Oakland, according to the Oakland Tribune.

I have done quite a bit of research on Penny Ross. I never found definitive info. that he worked with Disney. I have found reference where he share office space in the Chicago Tower Building with Outcault in 1916.

Thanks for the information, Kelly.