Jack Kirby fans are well-aware that the King penned a comic strip titled Lightnin' and the Lone Rider back in his formative years; the strip is well-documented because it ran in the very popular Famous Funnies comic book. However, the strips as printed there are obviously taken from a format designed for daily newspaper appearance, not comic book pages. The mystery is that we've never been able to find the darn thing running in any newspaper.

Acting on Kirby's vague memories that some newspaper in New Jersey ran some of his early efforts, I have for years eagerly checked any oddball New Jersey paper I came across from that era. I even sent Dave Strickler on a wild-goose chase to that state when I was given the name of a paper (the Red Bank Register) that supposedly ran the Kirby output -- Strickler and I were both terribly disappointed when the lead failed to pan out.

In this age of digitization, it is disappointing that New Jersey newspapers are not exactly coming onto the web in droves. We know that all sorts of obscure strips ran in the newspapers of New Jersey, because they often could not get the rights to run the big name strips. That's because the big New York City newspapers snapped up most everything worth printing, and exclusivity agreements made the popular strips unavailable to many other New York, Connecticut and New Jersey papers.

One paper that has appeared online recently is the New Brunswick (NJ) Home News, and ace researcher Jeffrey Lindenblatt just brought me the thrilling news that he found a run of Kirby's Lightnin' and the Lone Rider in that paper. Finally after several decades of searching, there's an important mystery strip we can finally cross off the long list!

The first news that the good people of New Brunswick got of the strip was this promo ad that ran on  November 16 1938. Note that our artist goes by the rough-and-tumble cowpoke name of Lance Kirby on the strip. Associated Features Syndicate, whose slug appears here for the first time, was reportedly writer Bob Farrell's start-up company: 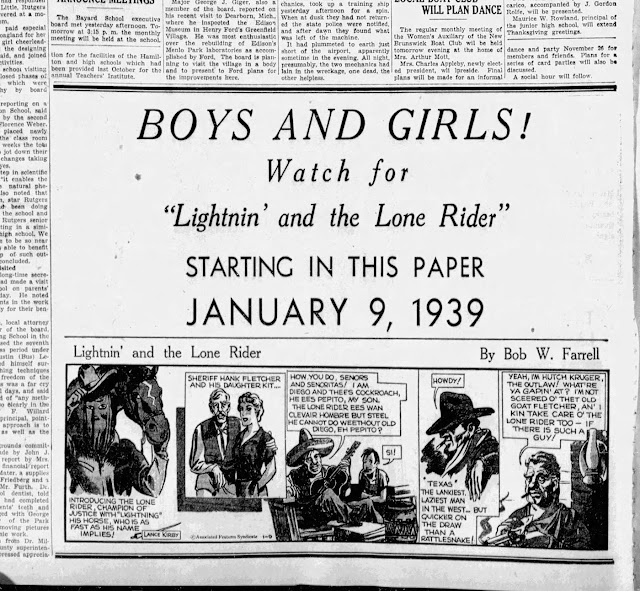 Then on January 3 1939, five days of promo strips ran to herald the new feature (Tuesday to Saturday, as they did not publish on Monday in observance of New Year's). Here's the first of the promos: 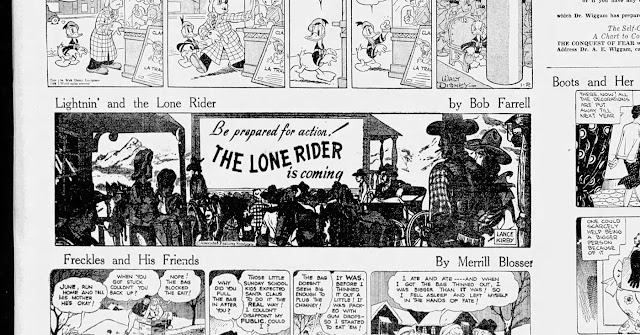 Finally, with the readers at a fever pitch of fascination from the breathless marketing push, the strip debuted on January 9: 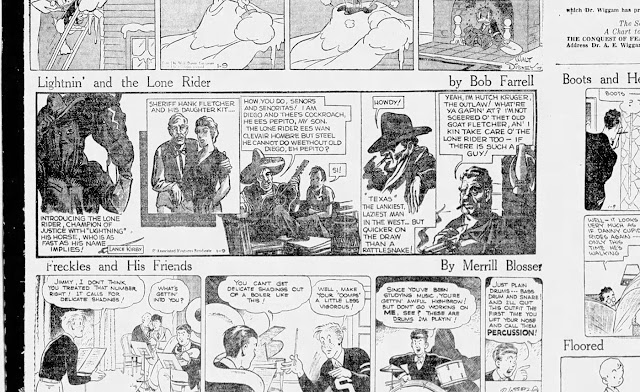 The readers of the Home News got to enjoy the King's art on the strip until February 18, a mere six weeks. According to Jean Depelley in Jack Kirby Collector #69, Bob Farrell, the writer of the strip as well as the head of the infant syndicate, fired him. Here is his final strip: 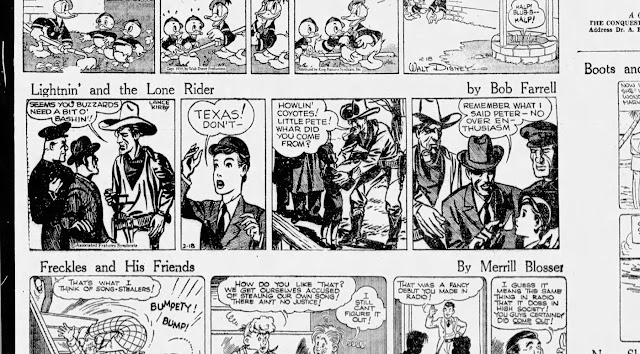 The next Monday a new artist debuted, none other than the great Frank Robbins, who I think made his pro debut here. This is his first strip, from February 20:

Though still wet behind the ears, Robbins already showed himself to be a consummate pro cartoonist. Unfortunately the readers of the Home News had barely gotten comfortable with him before the strip came to an end on April 22. For those keeping score, that's nine weeks of Robbins work, and a total of 15 weeks overall; 16 if you count the promo strip week.

According to Jean Depelley, Robbins only handled the strip for a month, with art on the remainder of the run by George Brousek, but I find no evidence of that here -- Robbins signs until the end. Here's the final strip:

Jeffrey Lindenblatt made the extra effort to triangulate the appearance of the strip in the New Brunswick Home News with the version that ran in Famous Funnies. The comic book adds somewhere between 17 and 19 pages of 'new' material at the end of the series -- was there a Sunday version of the strip that was not published by the Home News? Depelley says no; his claim is that Kirby revisited the series later, adding these pages, which are properly formatted for comic book appearance. Here is Jeffrey's Famous Funnies list -- each link takes you to the appropriate comic book on the Digital Comic Museum website.

Comments:
Slick detective work, there. Always nice to put a -30- on those kinds of mysteries.

I have actually been busy in recent weeks pouring over Newspaper dot com website to find the original dates of the reprinted strips in Famous Funnies, and have been working on many of these issues in the Grand Comics Database, and now I got some more editing to do! :-)

Question I have for those who compared the originals with the FF reprints:
Editor Stephen Douglas did a LOT of heavy editing for the daily strips in particular. Some of it, like trimming, expanding, or dropping panels, was clearly done to better fit the page layout.

Other editing was re-writing of dialogue, usually simplified, in the reprinted strip. I assume this was done because they felt the audience age of FF is younger than an average comic page in the newspaper. Was this done to this strip as well?

Douglas also altered art. Many strips, toning in the original black and white daily strip would be removed in most strips (replaced basically with color. Also any sexy content was censored (one of Big Chief Wahoo's Sunday strips had logo art of him dancing with two belly dancers and reprinted in FF, the belly dancers are gone). Was any of that going on?

My guess is probably not, I assume because of its short run, but I'd like to know if there was any.

Kudos on the good work everyone!

This may also solve another Kirby Mystery. In on eof his intreviews he mentions working for Frank Robbins. On the basis of that some of us (including me) have been looking for a ghostwritten and/or drawn Kirby sequence in Robbins' Johnny Hazard in the fifties. Then someone suggested Kirby might have assisted Hazard on some of his earliest work on Scorchy Smith. But this predates even that possible encounter. Cold it be that Jack Kirby said he worked with Frank Robbins and not for? And could this be the period he meant?

I think there is pretty strong evidence Kirby wrote the Lone Rider. One tell is the strip includes a character named Hank Fletcher. Well right around this time Kirby worked with Fletcher Hanks at both the Eisner and Iger shop and under Victor Fox.
In addition to that I find the character Mr. Chuda is strongly suggestive of many characters Kirby would create later.

I'm pretty certain that the Lone Rider only appeared in Famous Funnies #61 to #80, and the GCD listing for FF#82 is incorrect.
The storyline in #80 comes to a close, the scan for #82 (which appears complete) has no Rider pages and the Jack Kirby Checklist (from TwoMorrows) says the Lone Rider ends in FF #80 (see page 72).
And, for what its worth, I support the idea that there were planned, at least, a Sunday strip for at least 8 weeks -- and a couple of those 'Sunday' pages in Famous Funnies were by Robbins.

There may have been some confusion regarding Brusek, as the story by him in the two-part publication of Lightnin' and the Lone Rider in France seems to be an unrelated back-up story involving a couple of detective/adventures called Jim and Gail. You can see the last page of that story here: http://bdzoom.com/wp-content/uploads/2012/03/6.jpg
and the whole article is here: http://bdzoom.com/47241/patrimoine/jack-kirby-et-frank-robbins-quand-deux-geants-se-rencontrent/
Does anybody know if this material is from a comic book or a comic strip?