I am an ardent fan of the Blondie movies of the 1930s and 40s starring Arthur Lake and (...sigh...) Penny Singleton; and I was aware that there was a short-lived TV show attempted in the 1950s. But until I just happened to pick up this Blondie paperback issued in 1968 I was unaware that there was yet another attempt to bring Blondie to life: 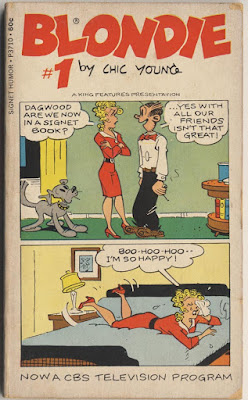 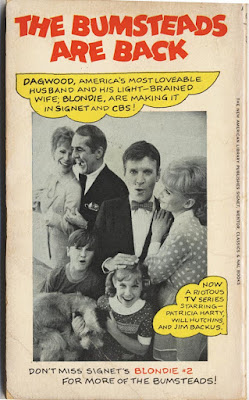 Here's a promo for the show that I found on YouTube:


"Blondie, so soft, so bouncy, Blondie, so slight ..." indeed! Patricia Harty is a worthy successor to Penny Singleton, but other than that, boy, what a hokey show; kinda creepy even. Somehow the show was kept on the air for thirteen episodes, according to IMDB.

Comments:
I still have this book, missing the front cover and falling apart. I remember watching the show, but don't remember anything specific about it. I do know that the young actress who played the daughter appeared on other TV shows of the era, even if I don't remember her name.

Looks like Pamelyn Ferndann to me. She has another comic strip connection; she voiced Lucy in some of the Peanuts specials.

I remember this series as well as it's 1957 predecessor where Arthur Lake reprised his role as Dagwood from the 1938-50 movie and radio series.
In that one, Pamela Britton played Blondie. It was a flop, a midseason replacement for LIFE OF RILEY, and only about twelve episodes were made. The 1968 version seemed a halfhearted affair, the actors were young and unknown, they looked too young, even too small to match up to the firmly ingrained Penny Singleton and Arthur Lake personifications, still present by way of the popular video presence of the old movies. The only recognizable faces were the oft-used child star Miss Firdin, and the obviously embarrassed Jim Backus as Dithers. The series was bad, and to make things worse, it was sent to the "Death Spot" by CBS, pitting it against NBC's DANIEL BOONE. It lasted a half a season, leaving only one note of interest, an episode that had Dag learning self-defence with the help of Bruce Lee. The show ended forty-nine years ago yesterday.

Singleton later did the voice for Jane Jetson, playing opposite George O'Hanlon (familiar from a long series of "Joe McDoakes" comedy shorts).

Blondie had a half-hour animated special at some point; I only recall that Alexander was a teenaged inventor. Blondie, Garfield, Hagar, BC, Family Circus, For Better or Worse, Ziggy, Doonsbury, Pogo, Cathy, Far Side, and probably some others got the half-hour special treatment. Peanuts accumulated enough specials to qualify for a series (and then they went ahead and made a series anyway). I recall a Popeye special, but that was a spin-off from Hanna Barbara's Saturday morning version.

There were two animated Blondie specials in the 1980's; BONDIE AND DAGWOOD (1987) and BLONDIE AND DAGWOOD-THE SECOND WEDDING (1989). Loni Anderson was Blondie's voice. They were made for Hearst in Japan by Marvel productions/Toei Animation.

Not only did Pamelyn Ferdin provide the voice for Lucy in "A Boy Named Charlie Brown" but the boy, Peter Robbins, was the voice of Charlie Brown in several shows.

Dagwood was played by Will Hutchins, who starred in the Western series "Sugarfoot."

You may want to buy the 2015 book "Blonde Goes to Hollywood: The Blondie Comic Strip in Films, Radio & Television" by Carol Lynn Scherling. A paperback will cost you about $25.00 at Amazon. Since you liked the Singleton-Lake movies you should check out the surviving episodes of the "Blondie" radio series that aired at the same time. Arthur Lake was always Dagwood in this series, but Blondie was played by Singleton, Ann Rutherford, and I believe at one time by Lake's real life wife Patricia. It is amazing how many cartoonists and their creations have appeared on radio and TV over the last 80 years.