Wish You Were Here, from Walter Wellman ... by Guest Contributor Evan Schad 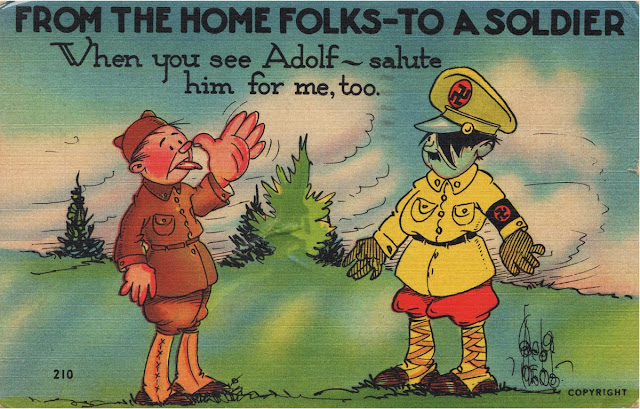 This linen-era comic card was published by the Massachusetts company Colourpicture sometime in the early to mid-forties as part of their "Morale Builders Series A". It has some great-as-always artwork by the prolific Walter Wellman, who had been doing postcard work since the late oughts (often self-publishing his own work!). This card depicts an Army soldier razzing Adolf Hitler, which as you many know was a common subject in military comic cards around this time. There is writing on the back, but unfortunately I can't tell you what it is as I only scanned the front of this card.

Comments:
Interesting thing is that the artist has used more of a World War I model for the American soldier -- note the linen leggings. The tunic-top is more the World War I model, too. Suggests to me that this card might be early 1942, at a time when the U.S. Army was still using Brodie Helmets and M1903 Springfields.

As well as the uniform, the tepid insult to Hitler might also indicate the card is prewar, when we were building up the armed forces for our possible actual involvement in the war.