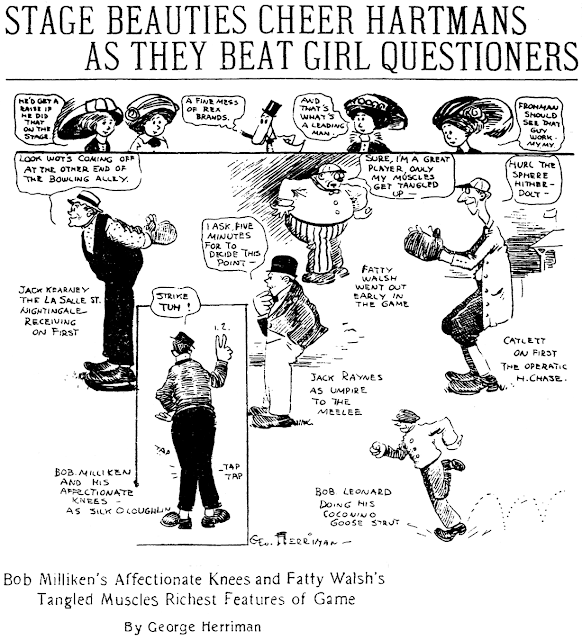 October 30 1909 -- Without the associated story, I can only assume this Herriman cartoon is referring to a celebrity baseball game put on by the local dramatis personae. Unfortunately this microfilm clipping was missing a prose story by Herriman, always an interesting different take on his talents.

Comments:
Well, Frohman (upper right corner) is probably a reference to Charles Frohman, the well-known Broadway producer. Leading me to think that the fellows depicted are probably LA-based theatrical personalities.

Silk O'Loughlin was a very well-known MLB umpire of the era.

Bob Milliken might well be the same fellow who, among other things, starred in the 1911 Victor Herbert musical "The Duchess." Curiously, he would play an umpire in the 1910 musical "Up and Down Broadway" (which also had Irving Berlin and Eddie Foy in the cast). I've seen a bunch of things for him in the 1910-1912 era.

I'm pretty sure I've got Catlett nailed. That's Walter Catlett -- the picture of him in Wikipedia is a dead ringer for Herriman's caricature. Catlett started on stage in 1906 (a few years before this cartoon), and was in the 1917 edition of the Follies, the original production of Sally, and introduced the Gershwin song "Oh, Lady Be Good!" He's also the constable locking everyone up in "Bringing Up Baby." According to Wiki, he also did opera, hence Herriman's comment.

I see a reference to a "Bob Leonard" as part of the Edgar Temple Opera company in the April 4, 1908 edition of the San Bernardino Daily Sun. The previous day's edition lists him as a comedian in that company's production of "The Filibuster." There's also a "Bob Leonard" who appears to have been an actor/director in a number of films in the 1910s, including some of the first Universal productions.