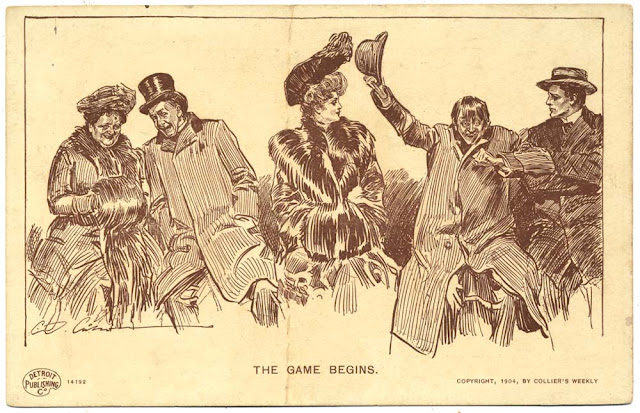 Here's the last Gibson card I have from Detroit Publishing. This one is number 14192, which could indicate that this was a huge series since it started with #14001. This one is undivided back, just like the rest of the series, so likely to have been published in 1906.

This Gibson drawing, though cute, is what I'd have to call a bad composition -- usually not a problem for Gibson. Not to mention the cheering fellow looks like an eight year old dressed up in his dad's coat. This one didn't run in Life, but in Collier's Weekly. Apparently they'd take his lesser efforts?

Comments:
My take is that it is an 8 year old boy - based on the bemused looks of the couple on the left, the kid might be there as a “chaperone” for the young couple? Maybe I think too much?

Another reading that may explain the composition: On the left an upscale family: mother, father and beautiful daughter (such a lady wouldn't go to a game unescorted). On the right a handsome young man. And a comical sports fan unaware he's a barrier to the attractive couple getting together. "The Game Begins" may be taken as the two making eye contact and trying to decide what do next.

Gibson did some other drawings on the theme of impediments, momentary or substantial, to romance. A familiar one has a man and woman sitting in separate rooms, each glumly leaning a chair against the same wall. Not sure if that was meant to represent a marital spat or lonely singles in neighboring apartments.

If you asks me, I think there's two kids inside that coat.

To me, the rowdy athletic supporter is probably not supposed to be a boy, his face is not one you'd see on one unless there's something wrong with him. The long, unkempt hair and the hollow eyes might rather suggest a thin, older guy, and his apparently impolite overenthusiasm indicates some other issue, like he's drunk, crazy, or senile.
As for the card, I don't know if this was all one continuously numbered series, certainly CDG could supply huge piles of past artwork. This one appeared in Collier's, and to include their copyright might indicate they owned the CDG cartoons they ran, so Detroit made a seperate deal to use them, and incorporate them into their overall CDG series.

the idea of two kids wearing one coat in order to get into a ball game for the price of one was so commonplace in 1906 that Gibson has taken it for granted that you know what it is. What is much funnier is seeing you folks trying to explain it. It's like watching the skit in which Peter Cook and Dudley Moore play two English intellectual music critics trying to analyze a blues lyric that contains the lines
Mama's got a brand new bag
Papa's going to rip it up tonight.

This is from a 1903 series of drawings titled "The Weaker Sex: The Story of a Susceptible Bachelor". I found it in "The Best of Charles Dana Gibson", 1969 Bounty Books.

The setup is a young man ordered by his doctor to avoid all excitement; the presence of a shy housemaid causes palpitations. So he goes on a trip to escape such stimulation but constantly encounters -- or at least makes eye contact with -- a succession of coolly provocative Gibson Girls: an acquaintance on a train, a friend's bevy of daughters, a bridge partner, fair strangers ... That's the joke. Sometimes he's alarmed, other times he's just the usual serious Gibson man. This one is titled HE SUDDENLY LOSES ALL INTEREST IN FOOTBALL. The last drawing has him resolved to Settle Down. He's trying to write a letter, but can't decide to whom because he's haunted by multiple smiling ghosts.

The first drawing in the series is an elegant nightmare: Four "fair entomologists" calmly study a tiny man on a tabletop. One of the ladies wields a magnifying glass and a long pin.

Gibson often portrayed his friends, especially celebrities, in his drawings. I'm something of an expert on actor Raymond Hitchcock. "Hitchy" was a slapstick comedian who wore his hair exactly as depicted and looked exactly as depicted. Hitchy and the gentleman on the far right, who is Richard Harding Davis, were Gibson's friends. The tall lady in the middle is, of course, Gibson's beautiful wife. Davis was a prolific adventurer and novelist (married to stage star Bessie McCoy), who had written a novel based on his own experiences, entitled "The Notes of a War Correspondent." Probably influenced by his friend Hitchy, Davis adapted the material into a lively farce entitled "The Galloper", and would produce this show in 1906 with Hitchy in the starring role (see my image, Raymond Hitchcock as Copeland Schuyler in "The Galloper"). The couple on the left were prominent society figures (whose names I can't recall). Gibson also did an illustration of Flora Zabelle, whom Hitchy would marry in 1905; it depicts a Gibson beauty (Zabelle) with a cupid whispering in her ear (about Hitchy's secrets).

Deleted my comment when it didn't show up under my "profile". Anyway, the illustration by Gibson of Flora Zabelle is sometimes called "The Story of His Life."