Betty Swords born was born Betty Armella Edgemond on August 17, 1917, in Gilroy, California. The birth date is from the Social Security Death Index. The birthplace is based on the address found on her father’s World War I draft card, which he signed June 5, 1917. Swords’ full name was published in the 1938 University of California at Berkeley yearbook, Blue and Gold, however, the U.S. Federal Censuses for 1920, 1930 and 1940 said her first name was Elizabeth.

In the 1920 census, Swords was the youngest of three children born to John and Gertrude. Swords’ siblings were John, Jr. and Iris, and her father was a school department auditor. The family lived in Oakland, California at 1955 35th Avenue.


Young Pupils Build Theater
Scenes of Old Italy Will Be Presented
Pupils of the fifth and sixth grades of the Peralta School, in Oakland, are building a theater in which scenes illustrating ancient and modern Italy, and episodes from the lives of American inventors will be shown.

The chief architects pf the theater are Carl Theile, Billy Seabury and Lloyd The. Their able assistants are Betty Edgemond, Jean Thursby and Florence Williams. Miss S.M. Thompson is the teacher in charge of the project.

In connection with the building of the theater, the students have turned playwrights and are writing plays which will be produced in class. These plays deal with the lives of American inventors.

in the miniature little theater, a large box was used. Curtains for the stage were made by members of the class and a system of lighting was worked out.

The students plan to make their own motion pictures, which can be shown in their tiny theater.


The 1930 census recorded the Edgemond family in Oakland at 6225 Hillegass. As “Betty A Edgemond” she was listed at the same address in Oakland city directories from 1937 to 1939. 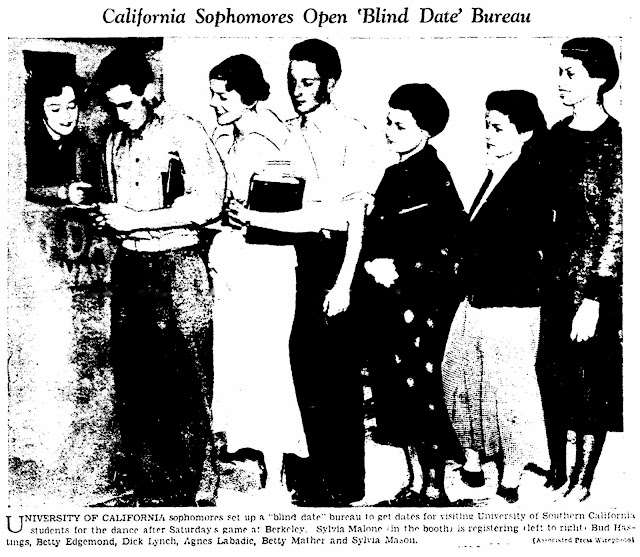 Swords was a student at UC Berkeley. The 1937 yearbook Blue and Gold said she was on the managerial staff of the school’s humor magazine, The California Pelican, and “Betty Edgemond made an all-time record of one hundred and thirty-one sales for one day….”

Her 1938 California voter registration (viewed at Ancestry.com) said she was a Republican.

According to the 1940 census, Swords was the last child living with her parents at the same Oakland address. Her occupation was new worker.

The World Encyclopedia of Cartoons, Volume 5 (1983) said Swords ”entered the Academy of Advertising Art in San Francisco to prepare for a career as a fashion designer but abandoned this intention upon her marriage.”


Another bridal couple whose honeymoon will be cut short by war duties, is Mr. and Mrs. Leonard Swords (Betty Edgemond), married Friday night, in Piedmont Community Church. Wedding plans were disrupted so that a mere handful of guests arrived instead of the 250 bidden. The reception took place in Oakland later where the company was augmented when the all clear signal was given.

Swords’ husband’s job required them to move frequently, from California to Texas, Louisiana and Mississippi. During World War II Swords mailed cartoons to various magazines but did not sell any. In the 1950s, Swords sold gags to Hank Ketcham of Dennis the Menace fame, and other cartoonists. (see The Comics Journal, R.C. Harvey’s 1995 interview with Swords, “At Sword’s Point: Humor as Weapon”).

Swords illustrated the book, Making the Most of Every Move (1958). 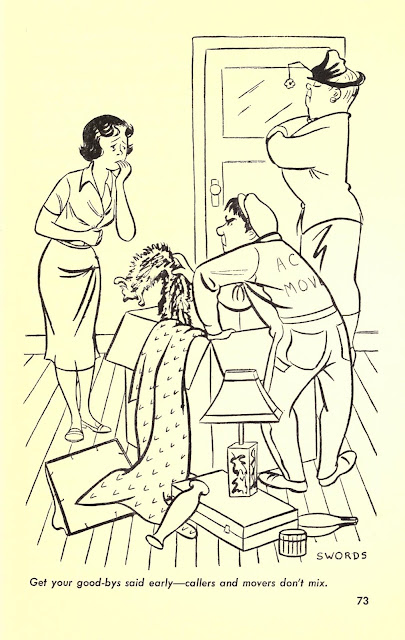 In August 1966 Swords was thanked in Jimmy Hatlo’s They’ll Do It Every Time. 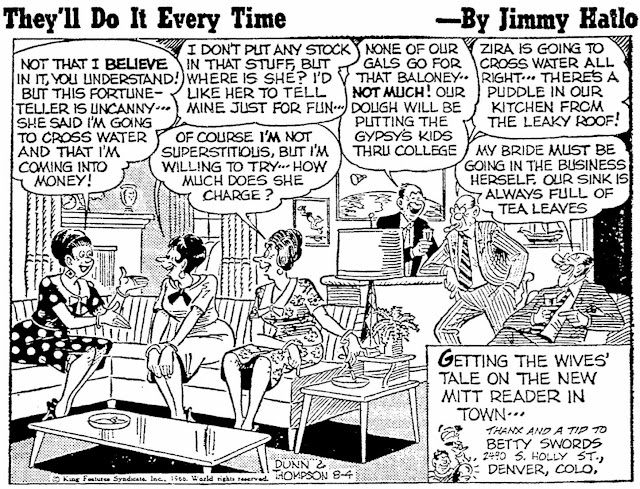 Swords was a subject in Robin Orr’s column in the Oakland Tribune, July 18, 1974.


Writer-cartoonist Betty Edgemond Swords, who illustrated the 1974 Male Chauvinist Pig Calendar, is visiting here from her home in Denver and being entertained by friends from her University of California Class of 1938. … Betty’s an active member of of the Denver chapter of NOW, worked like sixty on the campaign that put a colorado woman in Congress two years ago and has just joined a coalition of the Denver chapters of NOW and Gray Panthers (“a fantastic group of people”) dedicated to championing the causes of senior citizens.

Among other things, Betty is a regular contributor (“both writing and cartoons”) to the magazine Modern Maturity, published for the five million members of the National Association of Retired persons. She also writes for the Christian Science Monitor, review books for the Denver Post, had had cartoons published in the old Saturday Evening Post, Colliers and Look, and this February had an article on no-fault divorce in McCall’s

In any event, from her vantage point of long experience in the talent jungle, Betty thinks the women’s movement has come a long way, baby. As she and her friend left for St. Helena yesterday, she said, “I was just about to tell Virginia, ‘See, we’ve become respectable.’ The very idea of a women’s liberation movement has become respected and respectable. We’ve stopped being those bra-less bubble heads.”


Betty Swords, Denver Post political cartoonist and book reviewer will be the guest speaker in conjunction with Women’s Week, 1:30 p.m. Friday at the Women’s Week Center, Palmer Wing of Penrose Library, 20 N. Cascade Ave. Her topic is “Humor as a Weapon Against Women,” illustrating how American jokes perpetuate myths and stereotypes about women. Ms. Swords teaches courses, workshops and seminars in women’s studies and various fields of humor. She has published articles in McCalls, Christian Science Monitor and other national publications, her subjects being feminism, agism, the handicapped, and legal rights of women. She is founder of Denver’s chapter of National Organization for Women and is a charter member of both the Colorado Women’s Political Caucus and the Democratic Women’s Caucus. Ms. Swords has lectured extensively in behalf of the Equal Rights Amendment and was the 1972 television panel moderator for Gloria Steinem and the Democratic Women, aired nationwide. Ms. Swords’ lecture is free and open to the public.


The other day I innocently wrote something about “women’s lib,” which provoked a hot letter from Betty Swords of Denver. The proper term is “women’s movement,” and I am not to forget it.

Swords sent me a booklet (you will never know what pain it causes me to identify a woman by her last name only) put out by McGraw-Hill providing “guidelines for equal treatment of the sexes.” …