In the 1900 census MacConachie was the second of three children born to Peter and Martha, both Canadian emigrants. His father’s business was groceries and meats. The family lived at 109 Greenwood Avenue in Detroit. MacConachie was listed at the same address in 1906 to 1909 Detroit city directories.

MacConachie graduated from Detroit Central High School in January 1907. His artwork graced the cover of the school yearbook Stylus. 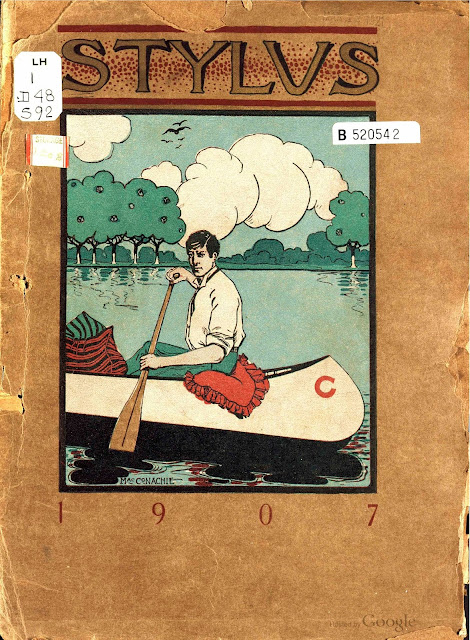 Below is MacConachie’s second prize drawing. 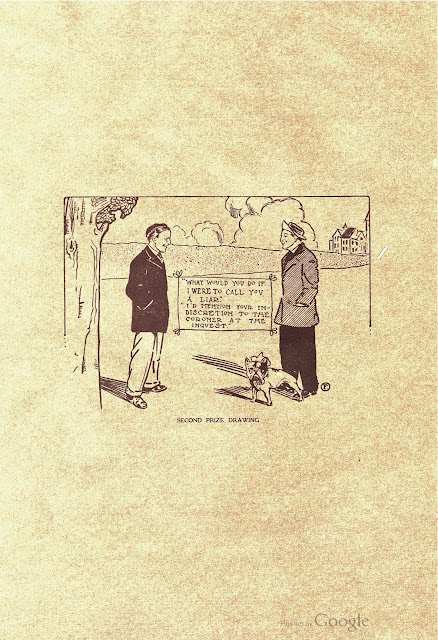 Below are two MacConachie Stylus illustrations. 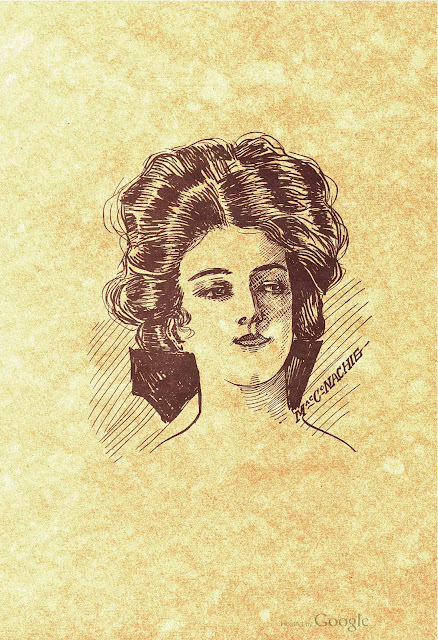 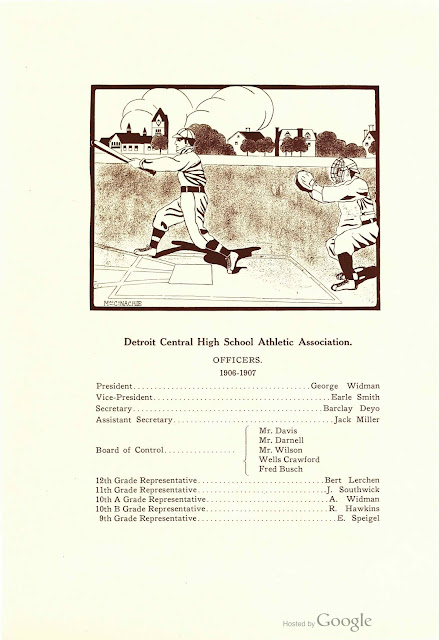 The 1910 census recorded the MacConachie family in Detroit at 55 Noble Street. MacConachie was a newspaper cartoonist. The 1911 city directory said he was a Detroit Free Press sporting reporter.

The Detroit Times, January 15, 1912, mentioned MacConachie and his baseball team.


Three Detroit Players Slated for Jobs with Roesink’s League Club
Dickinson and Schaub, Semi-Pro. Players, and MacConachie, Have Places.
Cleveland May Come In.
Chick Lathers Is Mentioned as a Tiger Who May Be Offered Position.

A. J. Roesink returned this morning from Chicago where he attended a meeting of the magnates of the newly organized Columbian Baseball league, with a franchise for the Detroit club.

He announced that three men now in Detroit would be among the players in the new team. Horace Dickinson and Joe Schaub, outfielders who have played with Roesink’s semi-pro teams for some time, and Gerald MacConachie, who belongs to the Norfolk, Va., team, are the men.

With these three men as a starter, Manager Roesink will build up his team from players who may be obtained from semi-pro teams all over the country or from the league teams in the national organization.

The New York Clipper, October 11, 1913, reported the Wortham & Allen Carnival at the Michigan State Fair and mentioned MacConachie as a Detroit press representative.

The 1914 city directory said he was a clerk residing at 306 Hogarth Avenue. MacConachie was at the same address in 1915 and a secretary of the Essex-MacConachie Company. 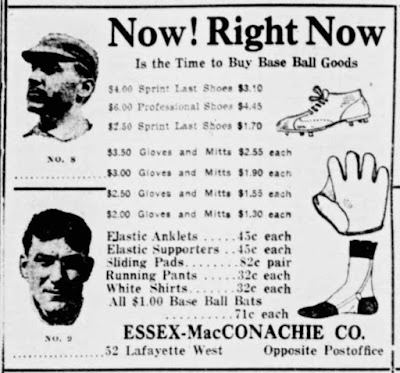 In September 1915 MacConachie produced a thrice-weekly comic strip for the Free Press.

In the 1916 city directory he was cartoonist at the Free Press. MacConachie’s occupation and address were the same when he signed his World War I draft card June 5, 1917.

The 1918 city directory listed him in the United States Navy.

MacConachie was featured in Editor & Publisher’s “Little Tragedies of a Newspaper Office”, April 6, 1918.

On November 26, 1919 MacConachie married “Neele Fornwalt” in Wilmington, Delaware according to a record at Ancestry.com.


In the 1920 census, newspaper editor MacConachie and Nell were Wilmington residents at 1103 West Sixth Street. According to Presbyterian baptism records, they had two children, Katherine in 1922 and Gerald Jr. in 1926.

MacConachie was profiled in the Fourth Estate, November 12, 1921.


MacConachie Started His Career as a Reporter
G. O. MacConachie, who, in addition to fulfilling his duties as assistant to President Joseph W. Powell of the United States Shipping Board Emergency Fleet Corporation, will have entire supervision of the personnel of the corporation, was born in Detroit.

In 1908 he joined the editorial staff of the Detroit Free Press, later transferring to the Toledo Times. He returned to the Free Press and was with that newspaper until 1914, when he entered the employ of Campbell-Ewald Company, advertising agents.

Mr. MacConachie in 1917 joined the Harlan plant, at Wilmington, Del., of the Bethlehem Shipbuilding Corporation, and was appointed head of the service department. During the three and a half years he was stationed with this corporation he supervised the general publicity work and had editorial supervision of its weekly plant publications in the shipyards at Sparrows Point, Md., at the Harlan plant, Wilmington, Del., at the Moore plant, Elizabeth, N.J. and at the Fore River plant, Quincy, Mass.

As cartoonist for the Detroit Free Press and as a writer on industrial subjects, particularly those connected with the shipbuilding industry, Mr. MacConachie has obtained an enviable reputation.

The 1922 Washington, D.C. city directory listed MacConachie as a Shipping assistant manager who resided at the Chateau Thierry.


When Mr. Day was asked to undertake the sale of the lots he immediately dispatched a squad of his experts to the section to look over the ground and make an estimate of the possibilities of the place from the viewpoint of both the home buyer and the speculator. In this squad was Gerald O. MacConachie of Detroit, Mich., a young man who had come to New York to take charge of the idea Incubator or to use a more technical term, the advertising department of the Day organization. All that Mr. MacConachie had to do was to produce at least one fresh idea a day, a job that he had performed satisfactorily for the Bethlehem Steel Corporation and the Emergency Fleet Corporation. On his first trip to Throgs Neck Mr. MacConachie got as far as the Junction of Eastern Boulevard and East Tremont avenues, where he was so impressed by the health and spirits of the child life thereabouts that ge forgot all about the lots. He had his one his idea for that day so he dashed back to the offive and made this report:

“They raise everything but rents in Throgs Neck section. And because they are their own landlords the folks in this rapidly developing district raise other little things. Hundreds of homes have sprung up where none existed less than a year ago and with the building of the homes there has been the sunshine of childhood to brighten them. The kiddies there are typical wholesome examples of what life in the open, with the green grass under their little feet and the blue sky overhead, will do for youthful eyes and cheeks. No crowded tenement atmosphere could have contributed to such robust happy childhood. They are red-blooded products of the out-of-doors and tributes to the far sightedness of parents who wanted their children to have a chance to grow up next to the heart of nature.”

The 1923 and 1924 Buffalo, New York city directories listed MacConachie as the advertising manager of Dunlop Tire & Rubber Co. and his address 840 Richmond Avenue. The same address was found in the 1925 New York state census.

In 1926 MacConachie moved to New York City. Editor & Publisher, November 20, 1926, announced the following, “G. O. MacConachie has resigned as advertising director of the Dunlop Tire and Rubber Company to become vice-president in charge of new business of the Brieger Press, New York. He was formerly advertising manager for Joseph P. Day, Inc., New York, assistant to the president of the United States Shipping Board, and publicity director for the Bethlehem Shipbuilding Corporation.”

Printers’ Ink, November 8, 1928, said MacConachie started his own business, “G. O. MacConachie, for the last two years vice-president in charge of new business of the Brieger Press, New York, has started his own advertising service at New York.”

In the 1930 census MacConachie made his home at 3506 146 Street, Flushing, Queens, New York. The family of four was assisted by a servant.

MacConachie was involved in car racing as noted in the Evening Star (Washington, DC), January 13, 1931.

The New York Sun, March 13, 1934, noted the debut of Silver Lining News, published by the Silver Lining Supper Club of Hotel Piccadilly. MacConachie was the main artist on the News.

In 1940 writer-artist MacConachie was a Flushing, New York resident at 35-32 Utopia Parkway. His two children were teenagers.

In 1946 MacConachie shared a copyright on a drama.

MacConachie passed away January 2, 1957, in New York. He was laid to rest at Fresh Pond Crematory and Columbarium.