News of Yore 1923: O.O. McIntyre on his Cartoonist Friends

[ O.O. McIntyre's nationally syndicate column, New York Day By Day, discussed cartoonists in an early April 1923 release. Headlines were chosen by the paper running the column, so I have omitted one for this reprinting. Nate Collier provided the cartoon to go along with the column (though he doesn't merit a mention!). Does anyone know who McIntyre is referring to in the last paragraph?] 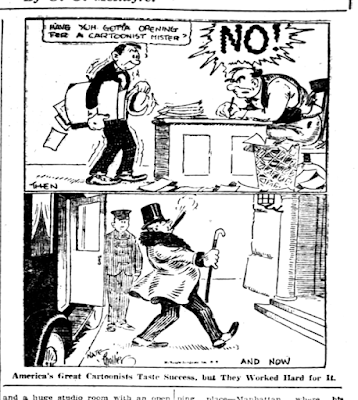 I sing today of the limners -- the black and white masters. In short, the cartoonists. From the solemn face of Tad to Rube Goldberg, the merriest wag of the lot.

Day in and out they lighten our sorrows -- giving us pungent, individualistic criticism of human life and human problems more humanizing at times than the printed word. They are sometimes impudent, but always clever.

There is Jay N. Darling, to his readers "Ding," who can draw a warped board fit for the galleries. "Ding" lives in Des Moines, where he owns stock in a thriving newspaper. He comes to New York often, but all the purring of publishers cannot make him leave the great middle west.

I have found pseudo-intellectualism among cartoonists as I have among some writers. "Ding" will sit in at draw, tell a good story, play a practical joke, but at the same time, he is a thinker. He is able to assimilate and digest life and draw his own conclusions.

George McManus is short and pudgy, with a certain gravity of demeanor until you know him. And then he proves a cutup. Sometimes you will find him at "Dinty Moore's" -- the corn beef and cabbage cafe near the Globe. His cartoon character was not named after the living "Dinty." It just happens the living "Dinty" and Mr. McManus are friends.

"Tad," whose pseudonym comes from his initials, is T.A. Dorgan. He was born in San Francisco and was a boyhood playmate of Jim Corbett, and they are neighbors now at Great Neck, L.I.

"Tad" has an owlish look and the droop of the scholar. Just when he was making good as a cartoonist an accident deprived him of a finger and he had to learn to draw all over again with the other hand. He has given the world more slang phrases than any other person.

In the good old days he was a nightly visitor to the Battling Nelson grill of Jack's restaurant. His companion was "Hype" Igoe, a sporting writer, and with their ukuleles they made things hum in the nocturnal life of the Roaring Forties. But the old days are gone and "Tad" does not come to town so often. Golf has claimed him.

H.T. Webster came out of Tommyhawk, Wisc., to add zest to the cartoon world. Fired in Denver for incompetence, he landed right side up as page 1 cartoonist on the old Chicago Inter Ocean and, as is usual with his ilk, New York claimed him -- but not before he had circled the world.

Webster is a 6-footer. He smokes ferocious black cigars, wears his hair fiercely pompadoured and is as gentle and kind as a wobbly little lambkin. The small town folk are his metier. Boyville still calls him. In the summer he goes to the island he owns at Meddybemps, Me., fishes and lounges about the village store.

On another island, hard by, lives Clare Briggs, whose "When a Feller Needs a Friend" and other comicalities have sent laughs around the world. Briggs is the Peter Pan of the cartoon world. If he lives to be 80 he will never grow up. He will always belong to the stone bruise age.

Walking with Webster one gets an impression of Rhode Island and Texas. Webster tall and massive, Briggs short and dumpy. And each smokes the cigar at the Joe Cannon angle. Briggs' New York home is at New Rochelle. His home, "Little Anchor," is made of old ship timbers and is one of the show places of the suburbs that George M. Cohan immortalized in his "Forty-five Minutes from Broadway."

There is a Kelly pool room, a big flower conservatory, a swimming pool and a huge studio room with an open fireplace in this house that laughs built. Briggs, of course, is a small town product and was born in Reedsburg, Wis.

Jean Knott, the penny ante sketcher lives in Clayton, Mo., the county seat of St. Louis county, but spends part of his time in New York. Almost any sunny day you can find him lounging with the loafers about the courthouse. It is difficult to get him to motor into town -- not even to see "Eddie" -- unless you suggest a game of penny ante. He loves the game and why shouldn't he? Its gentle stimulus has taught him the art of living in plenty without toil.

E.A. Bushnell resides in Cleveland. "Bush" began life at hard labor, but his unusual talents were soon recognized. He is shy and diffident and avoids cliques and back-slapping dinners.

The only dyed in the wool New Yorker I know among the comic artists is Jack Callahan, who first saw the light of day in Brooklyn.

Rube L. Goldberg was born in San Francisco, but seldom goes back anymore. Although he owns several apartment houses there, he says the old town is changed. He thrills to his view of Broadway from the Times building at which he works.

He stormed all the newspaper shops when he came to New York, with no success, and was about to return to the Golden Gate when he got a small chance to "do his stuff" on the Evening Mail. He has developed into one of the highest paid cartoonists in the world.

He, like Briggs, is a boyish unspoiled young man. He works with a furious intensity, but plays just as hard. He is at home in a hash house where prize fighters loaf as well as at the Ritz. It would be difficult to call Rube "Mr. Goldberg." I think he would resent it.

Fontaine Fox is a tall, slender young man with a short, light moustache -- English fashion. From Louisville he migrated to Chicago and then the usual stopping place -- Manhattan, where his original drawings and ideas won him a national following. He is rather quiet and unassuming, but withal extraordinary. He was born in Louisville, Ky.

Al Frueh, the caricaturist, is a droll-appearing young man. He hails from Lima, O., but has spent the larger part of his life in Paris and New York. One might find his double in front of the village drug store almost any summer evening.

Herb Roth is a Californian of short but athletic build. He has blonde curly hair and the most distinguishing feature is what Carolyn Wells terms his "button nose." He lives in Gramercy Park, a few doors from The Players, and his off moments are spent canoeing or playing handball. He used to chew tobacco and once grew a beard that was the despair of his friends.

He likes to appear "a rough guy" to hide the romanticism that is his. Friends found him one morning with tears in his eyes in a public park. He was gazing at a crushed flower.

There are others -- too numerous to mention here -- who, however, add just as much gaiety to functions. And they compose an unusual group of small town boys who have made good in the big city.

Their salaries are always big, but success has not turned their heads. They are home loving, law abiding and just regular fellows.

They proved their sterling worth during the recent World War. The influence they wielded was astounding. They sped up activities with simple and homely delineations and they gave of their talents freely.

It is small wonder that one of the richest men in America selects as his confidants and companions the men who draw the cartoons. He has found that they are shrewd and wise, wonderful friends and always loyal.