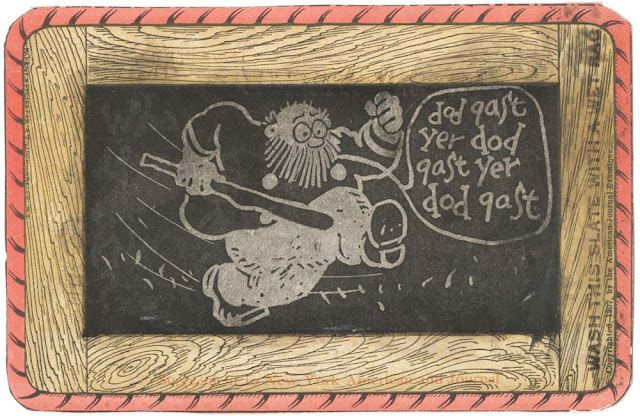 Here's a Magic Slate card issued by Hearst's New York American, a freebie given away with the Sunday paper. This one is a better quality image than most, featuring the Captain from the Katzenjammer Kids.

What I wonder about these gimmick hidden picture cards is this: do any exist that still have the hidden picture actually hidden, or do the images eventually appear even if they aren't 'activated'? Of course in this case we can plainly see that the original owner put water on it, as the edges are all water-stained.

Comments:
Hello Allen-
After collecting these cards for years I can say I have never seen one of the Magic Slates that hasn't been used. When the cards were interactive, such as the earlier sets where you'd iron it or hold it up to a flame, (I believe the image was covered in a thin veneer of parafin), and the cutout "mechanical" ones, they proved mostly irresistable to use. I have an uncut mechanical sheet, and have seen some unheated (or, unburnt) ones. I think that the slate series,( it's vegtable dye that one washes off) are generally rarer because they came out in 1907, when interest in the freebie cards seemed to wane. Hearst had issued other card sets in 1906, such as, morbidly enough, disaster and destruction of the San Fransisco Earthquake.It would seem the slate cards were the last ones.