Wish You Were Here, from Phil May 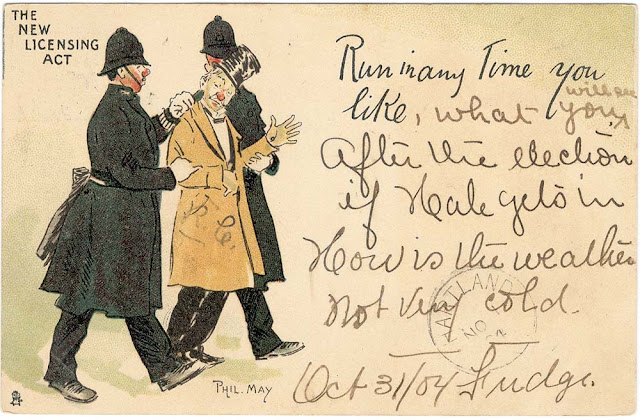 Here's a postcard penned by the great Phil May. This one was issued by the Raphael Tuck Company, and was #1008 in the "Write Away" series. This is a very interesting card for a few reasons.

First is the subject matter. The card seems to have been issued in 1904 (as the card was dated by the sender and is cited as the date on this website), and the subject therefore is presumably the Brits' 1904 Licensing Act. This act, one of many limiting the sale of alcoholic beverages, was not really addressed at pub habitues, like our red-nosed friend above, but at pub keepers, who were forced to pay into a fund to compensate pub owners who were forced to forfeit their licences. Therefore the gag doesn't really apply to the new 1904 licensing act much, but since all the licensing acts, and there were lots of 'em, were aimed at stemming liquor sales, everyone would easily follow the gag.

Second item of interest: I was surprised to see the spelling "license" on a British postcard. Don't they spell it "licence"? Well turns out I was oversimplifying my spelling. Outside the US, where license is both a noun and verb, turns out that in the Empire we are expected to spell it "licence" when used as a noun, and "license" when a verb. So I guess the licensing act actually applies to pub licences. Good to know!

Third item of interest: somehow this postcard was sold to a Canadian in New Brunswick. Surely Britain's pub laws didn't apply in Canada, I assume, so why export the cards? I dunno, but this guy in New Brunswick seemed to have it in for some politician named Neale who I gather was in favor of abstention via government mandate. Anyone know if this Neal is a British or Canadian politico?

Okay, last item of interest. This 1904 card has a divided back, which only got going in the US in 1907. So I gather other countries allowed messages on the back earlier. News to me. I notice this Canuck, though, stuck with scrawling all over the front anyway.

Comments:
Hello Allan-
I think the card scrawler actually wrote "Hale" not Neale. This makes sense as one Fredrick Harding Hale was the local MP since the 1880's and was running again in 1904. Alas, poor Hale lost his chance to stay on representing Carlton County, New Brunswick(Where "Hartland" is to be found), beaten by a Liberal party upstart named Carvell.
The Tuck company was one of the world's first international publishers, starting in the 1890's, they were being sold everywhere, in and out of the empire. Americans would more than likely get an English gag.
I don't know when it was legal to write a message on the back in Britain and Empire mail, I have some mid 1890s' ones, views of York, that are still only to be front-written, and this one just keeps the tradition alive because for one thing, you want to keep appealing to markets that still have the address side taboo, and the "continue the message" technique was very popular with card writers.