George Teeple Eggleston was born on November 21, 1906, in Oakland, California, according to his world War II draft card which also had his full name. In the 1910 U.S. Federal Census Eggleston was the only child of Charles and Mabel. They were Oakland residents at 4089 Howes Street. His father was a real estate agent.

The 1920 census said the Eggleston address was 5116 Fonthill Boulevard in Oakland. His father was now an insurance agent. At Fremont High School Eggleston was on the yearbook staff. He was one of two artists on the Flame.

Eggleston continued his education at the University of California in Berkeley. He was a member of Kappa Alpha. The 1929 yearbook, The Blue & Gold, said Eggleston was the Spring editor of the school humor magazine, The Pelican. 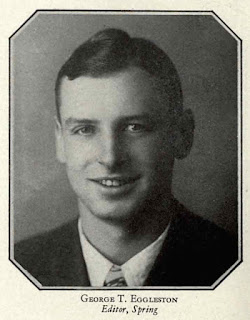 
George T. Eggleston, senior in the University of California Law School and art editor of the Pelican, campus publication, was awarded second prize, a $250 gold watch, from a field of several thousand in a nation-wide art contest conducted by a magazine, according to word received by him yesterday. Young Eggleston does his art work as a side line to his study of law at the university and his talent is without instruction. He is the son of Mr. and Mrs. C.P. Eggleston, 1221 Cavanaugh road, Oakland. The committee awarding the prizes included James Montgomery Flagg, H.N. Swanson, editor of College Humor; Gaar Williams and Arthur William Brown.

According to the 1930 census, Eggleston was a lodger in Evanston, Illinois, at 927 Hinman Avenue. His occupation was salaried magazine artist. About three months after the census enumeration Eggleston and Martha Downing obtained a marriage license on July 21, 1930 in Yuma, Arizona.

Eggleston was the first artist to draw Rowdy Dow at Killjoy College, which debuted January 4 1931. On April 10, 1932 he replaced by “Tom”. The strip was distributed by the Bell Syndicate/Collegiate World.

Eggleston’s appointment as editor of Life magazine was reported in the Chronicle, March 6, 1932.


George T. Eggleston, graduate of the University of California with the class of 1929, and former editor of the Pelican, has been made editor of Life, New York magazine. Eggleston is the son of Charles P. Eggleston, 515 Vernon street, Oakland, and was graduated from Fremont High School, Oakland. Following his graduation he was associate editor of College Humor at Chicago. He is a member of the Kappa Alpha fraternity and was married last july to Miss Martha downing of Berkeley.

Eggleston’s second marriage was to Hazel Nicolay on January 18, 1936 in Windsor, Connecticut. The 1940 census said Eggleston was a magazine editor whose income, in 1939, was $5,000. He and his wife had a seven-year-old daughter, Day, and a maid. They lived in Greenwich, Connecticut at 4 Chapel Lane. In 1935 they had lived in New York City where Eggleston was an editor on the old Life magazine according to The New York Times, July 9, 1990.

On October 16, 1940 Eggleston signed his World War II draft card. His address in Greenwich was Buxton Lane. His employer was Conde Nast Publications. He was described as six feet two inches, 190 pounds, with blue eyes and brown hair.


Mr. Eggleston was editor of Scribner’s Commentator, a magazine published in New York that helped lead the opposition to the United States’ entrance into World War II in 1940 and 1941. He changed his position after the Japanese attacked Pearl Harbor and enlisted in the Navy, but charges of disloyalty dogged him for years.

Mr. Eggleston recounted some of the harassment against him in his last book, “Roosevelt, Churchill, and the World War II Opposition,” published by Devin-Adair in 1979. He wrote about leaving the Navy after Walter Winchell, the syndicated columnist and radio commentator, urged Americans to start a letter-writing campaign demanding his removal from the service.

The Times said Eggleston “was an editor at Reader’s Digest after the war. In 1957 he and his wife moved to St. Lucia in the West Indies. Twenty-two years later, they moved to Sarasota.”

Eggleston passed away on July 7, 1990, in Sarasota, Florida.

Comments:
I'm intrigued by some of the dates given here. Eggleston and Martha Downing obtained a marriage license on July 21, 1930 but the March 6, 1932 Chronicle says they married the previous July (i.e., 1931). Did they wait a year, or is one of those dates in error?

Even more interesting is that Eggleston's second marriage to Hazel Nicolay was on January 18, 1936, but in the 1940 census they are said to have a seven-year-old daughter (i.e. born in 1933). Was Day the daughter of the first marriage or born to Hazel and George beforehand? Is it known how the first marriage ended?

Yes, they waited a year to marry.