In the pages of The Fourth Estate, February 27 1915 edition, we find this short article:


Henry Muheim, cartoonist for the Florida Metropolis of Jacksonville, has been attracting considerable attention in the South through his bright and timely cartoons.

After graduation from the Providence School of Design, Mr. Muheim did cartoons under Sid Greene of the New York Telegram, but then in charge of the art department of the Providence (R.I.) Telegram. For the past eight years Muheim has been furnishing the cartoons for the Metropolis on national and local topics. These have been so good that they have been reproduced by the London Sketch, among other papers. His comic strip, "Alligator Joe" is known throughout Florida.

In Editor & Publisher, January 14 1911 (thanks to Alex Jay for digging this up), we get another glimpse of Mr. Muheim's activities:

A complete reorganization of the staff of the Jacksonville (Fla) Metropolis has been made recently. E. E. Naugle, formerly sporting editor, is now on the city desk. Frank L. Hulfaker is news editor. Ernest Metcalf has taken charge of the State news department. George D. Love, formerly of the Denver Post copy desk, is on the City Hall and Federal Court run, while George Benz, formerly of the Philadelphia Telegraph. is doing police work. W. J. Morrison, the well-known turf writer. who has seen service on Baltimore and Montreal papers, has taken the sporting desk. with L. S. Clampitte, formerly of the Chattanooga News, as assistant. Henry Muheim, the cartoonist, has recently created a novel character for the sporting editions of the paper in “Pete the Piker,” which has caught on with the racing fraternity now attending the winter meeting at Moncreif Park.

"Alligator Joe" is a strip I cannot locate. Same with "Pete the Piker", though it is less clear that it was a strip -- character might have just been a sports cartoon mascot.

The Florida Metropolis is unavailable on microfilm, no doubt because in its day it was best known mainly as a real estate developers' journal, and I don't mean that in a good way -- I mean folks selling swampland to gullible tourists. You'd think that a strip that was 'known throughout Florida' would show up in an occasional mention elsewhere, but my searches have turned up nothing. The title "Alligator Joe" itself seems unlikely -- there was a pretty famous guy in Florida who exhibited and sometimes even wrestled alligators known by this name. Unless the strip was actually about that guy?

Anyway, Muheim was at least definitely at the Metropolis. Here's a rare surviving cover page by him. Nice attractive style. Ironically, the cover of a special real estate section: 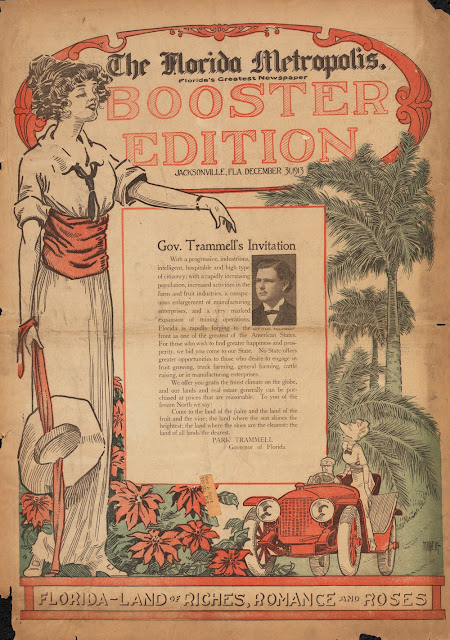 So, can anyone offer proof of the existence of "Alligator Joe" or "Pete the Piker"?

Comments:
Hello Allen-
Warren B. Frazee, the guy known as "Alligator Joe" was probably the most famous man associated with Florida, who made himself famous for being the "Crocodile Hunter" of his day. He had an alligator farm in Florida from which you could buy gators through the mail! Sometimes his name in news articles is Frazier. He had a famed gator exhibit at Coney Island where you could see such wonders as a reptilian incubator. He died in 1915 at his exhibit at the Panama-Pacific exposition in 'Frisco.
It would seem entirely possible that he, as a self-promoting showman, could have a cartoon series, especially in something like "Florida Metropolis," designed to intrest one in the glories of that state.