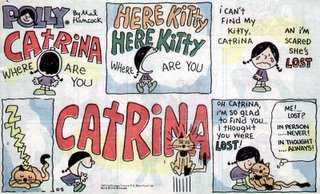 Mal Hancock created quite a few syndicated comic strips, the first we know of being Nibbles that ran 1960-63. All of Hancock's series from the 1960s were done for the George Matthew Adams Service (Washington Star Syndicate after they bought out GMA). This syndicate was always limping along, rarely getting any of their features in a lot of papers. So it must have been exciting for Mal when he sold Polly to the Chicago Tribune-New York News Syndicate in 1972. Finally a chance at making some serious syndication money!

Unfortunately it was not to be. Polly ran from sometime in 1972 (anyone have a specific start date?) until 5/25/1974, never having caught on with newspaper editors. Perhaps Hancock's naive style, which he used on all his features, just wasn't what a lot of newspapers were looking for.

Mal Hancock is often confused with Mal Eaton, the two of whom shared a signature of "Mal" and had styles that were a bit similar. Not immune, in researching this little essay I discovered a mistake in my Stripper's Guide listing where I assigned one of Hancock's features to Eaton. Oops!