Obscurity of the Day: Jimmie the Messenger Boy 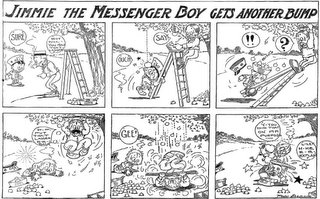 Was there eveer a cartoonist that had a more intriguing name than Redw. Shellcope? Too bad his cartooning doesn't live up to the promise of that cool name. Redw.'s Jimmie The Messenger Boy started on 5/3/1903 in the Philadelphia Inquirer and ran until June 1913. The stories, seldom much better than the one in our sample here, were pretty basic slapstick humor, and the art, though excellent, was swiped lock, stock and barrel from the great William F. Marriner.

I guess Marriner's style was easy to copy, because there was a crop of at least a dozen cartoonists who did imitations, mostly pretty accurate, of his style. His wispy lines and kids with enormous heads on tiny bodies make the stuff instantly recognizeable.

Regarding the June 1913 end date, I can't do better than that because the Philadelphia Inquirer on microfilm very rarely includes the Sunday comic sections starting about 1910. I've checked different versions of the film, but all are missing most sections. It's a real shame since there's some great material there to be indexed. Most of my Inquirer dates after 1910 come from indexing papers that took the section in syndication. That gets me pretty good dates for most stuff up to about 1915. After that it gets really tough because, as I mentioned in the last post, the Inquirer's syndication pretty well died after that.

Comments:
re: Redw. Shellcope
This name came up elsewhere sometime back and it sent me on a google search.

The name "Shellcope" doesn't have a lot
entries so the search was rather quick.

First is a 1928 Ocean City, N.J. city
directory which lists a R. Edward and
Marie Shellcope as homeowners and in the
business of "Art goods".

This leads us to a Marie Carter Shellcope who was a graduate of the
Philadelphia Academy of Fine Arts.

An Andy Madura page selling Sunday
comic strips gives us a Jimmy the
Messenger Boy page credited to
"Rube Shellcope?". Don't know if the
question mark is for crediting the
page or the name.

So what is his name? I dunno.
But it was an interesting journey.

I'm afraid I'm the source on OSU's Red W. Shellcope. In days past I interpreted his signature that way, and they used it as I gave it to them at the time.

"R. Edward" makes a lot of sense, tho I see no period in his sig between the R and E. The romantic in me always hoped that his name was something like "Redwing", though.

Thanks Cole! I guess you have all those sections in hardcopy? Lucky dog...

Here's some other Inquirer dates that I've been unable to find on microfilm:

Fineheimer Twins - continued running as an occasional filler until at least 1930 - do you have an end date, and do you know if they were just reruns in later years?

Hank Hinkle by Gallagher (1908)- can you shed any light on this feature - my notes make no sense to me.

Kid Trubbel - I have tentative running dates of 1910-18; the film is so fragmentary that I can't get any closer.

Plumbing Pete by Gallagher - another mysterious one from 1908 - not in my Inky index, but referenced in SG as being in my files, but can't find it there.

That Irresistable Rag - best I can do are tentative dates of May 1913 to sometime in 1916. Another Doyle production after Knerr left?

Our Friend Mush - need an end date for it in the Inquirer (before it became Just Kids that is).

Hippo And The Monks by Gallagher - looking for an end date, best I can do is sometime in 1915. I note that this one ran more often in the Inquirer's syndicated section than it did in the home paper. That's all we need...

DeSmears the Portrait Painter - need an end date, sometime in 1902?

Yo Cole -
* I have a note that the latest Inky Fineheimer I have found was in the January 12 1930 section.

* Hank Hinkle - here's a weird one - the strip ran twice in the Boston Globe as a b&w strip on 9/12 and 10/9/08, earlier than in the Inquirer itself. Do you figure the Inky only ran it in their section when they had a hole to fill, and it was syndicated earlier? Is this one of those that requires a trip the Gateway of the West?

* Kid Trubbel, thanks for the info, and for sending me off to wiki to find out who the hell Schliemann is.

* Irresistable Rag, I take it Doyle's start is interspersed with Knerr leftovers? My latest on this series is 12/3/16 in the Pittsburg Dispatch, which may be running late. I have a 10/29/16 from the Evansville Journal-News which seemed to be running things on time.

*Hippo and Monks - this is the end date I had from the Inky, but I had a cryptic note saying that it lasted until early 1915 at least, but no reference as to where I saw it. Doing Mr. Schliemann proud here today...

* Little Possum Gang - ok, any idea when Doyle took it over from Payne?

Thanks very much for checking into all this stuff!

* The 1-12-30 Fineheimer is a half pager, and there's not another one through June where I quit indexing in that session.

* Yes, I've too seen quite a few Big Scalpers in other papers compared to the few that ran in the Inq. What I wouldn't give to understand the logic behind it all...

* According to my indexing notes the Elliot DeSmears did appear to be about the same as the Jean Mohr version.