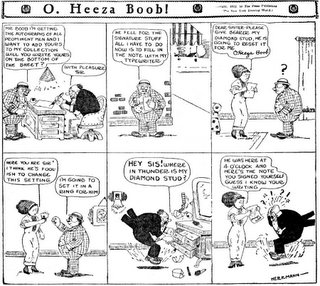 Don't get excited over that signature. We don't have an undiscovered George Herriman strip here. The signature is Herrmann, and one glance at the art tells us that we're dealing with a different fella here. O. Heeza Boob ran in the New York Evening World, and was syndicated by Press Publishing, from 9/21/1912 until 4/1/1913. Herrmann did one other strip for the World, called No Wonder! after this strip ended.

Herrmann's only other known credit is for a strip titled Ben, which was probably syndicated by World Color Printing though I've never seen an example that had a copyright notice on it. The strip pre-dates Herrmann's New York World work, first appearing in 1911, but the strip appeared, presumably in reprints for a long time.