Obscurity of the Day: Sheer-Luck Homes 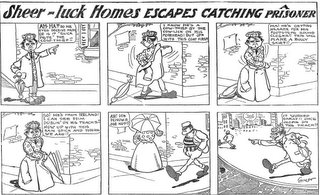 Sherlock Holmes was already an institution by 1907 when this satire appeared. There were quite a few strips that played on the Conan Doyle character, and this particular one ran just three times between 2/10/1907 and 4/14/1907. The creator, Myer Marcus, was a workhorse cartoonist who did many recurring features and one-shots for the Philadelphia Inquirer between 1906 and the late 1910s.

One tidbit about Marcus is that it took me a LOT of digging to determine whether his name was Myer Marcus or Marcus Myer. He always signed his work Myer, and seldom got a byline. When he did, though, the names were given in practically random order from one to the next. I don't recall anymore where I finally got a source that tied it down, but tie it down I finally did.

The Inquirer had lots of interesting strips running in these days, most of which have been summarily ignored by the published comic strip histories. I'll be posting several more samples in coming days. The Inquirer began its own Sunday comics section in 1901. The syndication of the section seems to have begun in earnest in 1906 (or at least that's when I start finding it appearing outside Philly). The section did quite well in syndication for a long while, but in 1914 when Harold Knerr left to take over Katzenjammer Kids the section went in to a nosedive in quality and the syndication business dried up quickly. The section limped along until the late 1910s and then the Inquirer started dropping most of their own strips in favor of buying syndicated material from other syndicates.

Comments:
Is it just me or does Sheer-Luck Holmes look like a distant ancestor
of Alfred E. Neuman. By the way, this is a great site.

Hello, Allan---I can only account for two episodes of SHEERLUCK HOMES, 2-10 and 3-17-07. On 4-14-07, I have Myer doing a DDOUBTING THOMAS episode. The Inquirer started it's color comics on 4-10-98, but it was unsyndicatable at the start.(Local references, odd sizes and shapes to their strips, and some sub-par art) They seem to me to be ready for syndication by 1903, but I've never seen Inky stuff syndicated any earlier than the spring of 1905, in the BOSTON POST. Perhaps their biggest client was the ST. LOUIS GLOBE-DEMOCRAT, beginning 8-6-05, and carrying it's material up to 1919. After Knerr leaves in '14, the whole syndicate is handled by the lackluster Joe Doyle, Jack Gallagher, and the how-did-he-get-anywhere Ad Carter. The last Inky material I've ever seen is 1928.--------Cole Johnson.

Hi Cole -
That third episode of Sheer-Luck didn't appear in the Inquirer - I found the third in the Washington Post which ran their section for awhile. I guess the Inky ran an ad or a one-shot in that space.

Hello, Allan---In the Inky section in question,[4-14-07], there was an ad (National Mfg. Co., Passaic, N.J.) that took up most of the page, and that week's JIMMIE THE MESSENGER BOY was shrunk down to fit.....(The INQUIRER itself quite often ran strip-killing ads, where client papers like the LOS ANGELES HERALD and the NEW HAVEN UNION apparently never did.)....Another of the joys of trying to do the INQUIRER is the fact that they ran an extra page that never showed up in the home paper. The ST. LOUIS GLOBE-DEMOCRAT ran this extra page in their magazine section, f'rinstance.

No, no, no, no! You are not allowed to tell me that! I've been to St Louis for a week of indexing and I DON'T WANNA GO BACK. LALALA I can't hear you....

Hello----So sorry. I hate to cast the arc of ill bode. Here's a mini-tidbit to help clear well and good the ramble of this sure orb: Every now and then, the INQUIRER would dust off old art that had never been used. On 2-14-09, one last episode of SHEER-LUCK HOMES by Myer , "SHEER-LUCK GETS A BIG CASE DOES HE NOT?". Take a couple of aspirin, Allan, you'll be okay tomorrow.......Cooooole Johnnnnssooonnn

Not sure if anyone's still following this page, but I found an episode called "Sheer-Luck Holmes (Almost) Bags A Murderer" in the Sept 22, 1907 issue of the San Diego Union.

Pea! Would it be possible for you to email me that BAGS A MURDERER STRIP? I'm at alortie4@aol.com -- I have 4 different SHEER LUCK strips, but not that one nor the one Cole Johnson calls GETS A BIG CASE. I'll include you on my overview when I send it out.