Obscurity of the Day : Sleepy Willie 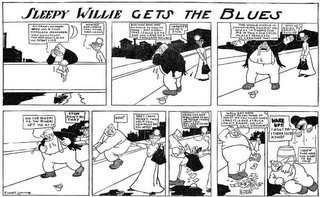 The great Sidney Smith, creator of the Gumps and Old Doc Yak, got his start in the bigtime at the Philadelphia Inquirer way, way back in 1902. He reportedly had earlier cartooning jobs, but this is the earliest comic strip work I can document (can anyone supply a sample of his earlier work?). Sleepy Willie was his premier strip at the Inquirer, though he did quite a few others.

Sleepy Willie And Johnny Brighteyes, the full title during parts of the run, started on 3/23/1902 and finally breathed its last on 9/9/1906. As was typical of the strips of the day, Smith did not produce it every week, but just when he had a bright idea for the character.

The example shown here is from the tail end of the run in 1906. For a bonus I'm also including a neat (though terribly blurry) newspaper photo of Smith from 1925. Sorry about the quality, folks - I don't print the newspaper, I just scan it!

Comments:
this is really cool to see-- I love the early Smith stuff (like when he was actually drawing the strips-- before fame and fortune). I didn't realize that he did any strips before buck nix. On a related note, when did Buck Nix begin/end?
thanks for posting this stuff-- don't know WHERE i'd ever see this stuff otherwise...

Hi Tim - Buck Nix ran in the Chicago Examiner starting in 1908. I don't have a specific date because I have not been able to obtain microfilm of that paper. The strip later moved to the Hearst camp and appeared in the New York American 2/23/09-10/10/11. Truly definitve dates on the Hearst run should really come from the Chicago American, but, again, I haven't been able to obtain that paper for indexing.

Thanks for the question!

Thanks for the dates you have.. at least I know where to start looking! hmm, you're not going to be putting any buck nix or old Doc Yak sundays on ebay are you?

Sorry, Tim, not at this time. I would part with a LOT of other material before I'd fork over my Old Doc Yak Sundays!

thanks again for posting this stuff--