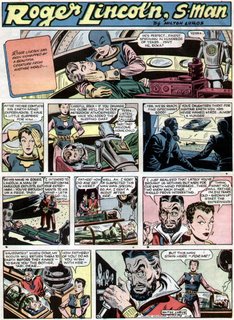 I was afraid someone would ask what S-Man stands for, and DD Degg did. 'Fraid I don't have an answer for you, DD. I have a smattering of dailies somewhere that I think had the answer, but they are in the giganto pile of Stuff To Be Filed. Once they go in that pile they don't come back out - it's the comic strip black hole.

So I checked my inventory and found that I have one solitary Sunday in my collection (11/18/1951). I was able to dig that out and it is reproduced here. Problem #1 is that this Sunday has obviously gone on a sci-fi tangent. I could swear those dailies (the ones consigned to terra incognita) concerned some sort of spy/gangster type material. Problem #2 is that Milton Luros (aka the porno king - see DD Degg's reply to the prior post) is obviously doing the Sunday almost a year before the date I cited in the original post. That date came for my indexing of the strip in the microfilm of the Reading (PA) Eagle. So now I don't know what's going on. Either I did some sloppy indexing or there is a lot more information to be found on this strip. Can anyone shed some light on the subject?

Okay, that explains where the date came from. I misinterpreted your Long Island end date as the date Novick left the strip. I have since found in the Reading Eagle that the strip lasted until 8/30/53, so the only remaining question is when Luros took over. Probably a pretty good guess that it was at the title change, and that calls into question whether these strips actually had something to do with each other at all, or if the McClure Syndicate simply offered Roger Lincoln as a replacement strip when Cynthia ended. Only way we'll find out for sure is to go back and take another look at the papers...

The strip was a not a replacement it followed the same pattern of Steve Roper, Jim Hardy etc.

Do you recall wht the connection was? Did the "Cynthia" strip introduce Roger Lincoln into their storyline before he went off on his own?

I am just catching up on this... I have some dates differently than your book, with April 29 rther than April 22 the starting date for Luros and a different date for the name change. I'll be gatheringstuff and doing it o thursdays. When I have a full list, I'll mail you.

Based on the samples on Ger's blog, Roger Lincoln worked for the state department, hence S Man.
Cynthia got embroiled in a mystery due to a train crash where a dying man told her to take some packages to Roger Lincoln, and the strip seemed to evolve from there. You can check it out at http://allthingsger.blogspot.com/2013/02/cynthia-oh-cynthia-thrsday-story-strip.html?m=1