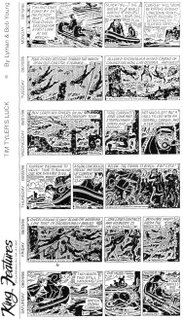 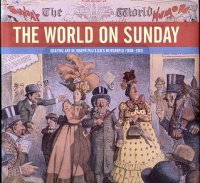 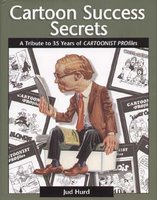 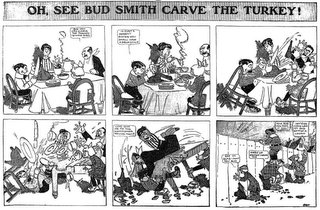 Johnny Gruelle, famed creator of Raggedy Ann, spent a little time working for the World Color Printing Company of St. Louis Missouri. World Color (my favorite syndicate) did preprint Sunday comic sections. If you, a newspaper owner, wanted to add a Sunday color comic section to your paper but couldn't afford to print your own color comics or hire an outside printer to do the job for you, then companies like World Color were your last resort. They printed a standard comic section, added your logo to it and shipped you however many copies you needed.

Gruelle (who signed himself Grue during this period) did a number of strips for World Color. The Bud Smith strip was not created by him, but he did a few episodes of it in 1908-09. The strip was created by George Herriman in 1904. 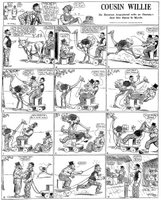 Sunday Tearsheets for Sale on eBay

I'm back from my weekend off and I'll start off with a post of pure crass commercialism. I am selling a large collection of 1950s and early 60s Sunday strips on eBay right now. There's a lot of great titles available, including Flash Gordon, Prince Valiant, Hopalong Cassidy, Rusty Riley, Mandrake the Magician and lots more. All lots are pictured (a sample pic accompanies this post). The auctions end soon so don't delay!