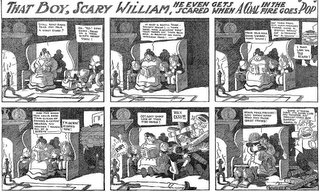 Obscurity of the Day: When Dreams Come True 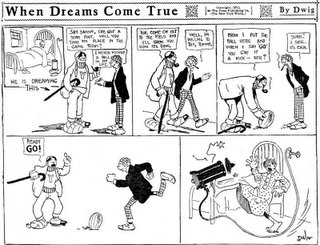 Clare Victor Dwiggins, better known simply as Dwig, was one of the most prolific and talented cartoonists of all time. Today he's best remembered for his Tom Sawyer/School Days strip, and his Ophelia character.

But that's just the tip of the iceberg. Dwig created dozens of different series, some of them short-lived like our obscurity of the day, When Dreams Come True. This series ran in the New York Evening World (syndicated by Press Publishing Company) from 10/21 to 12/24/1912.

(Sorta) Obscurity of the Day: Captain And The Kids

What's obscure about The Captain And The Kids? Nothing about the Sunday, which ran for 55 mostly successful years. What is obscure is the daily version which not many have ever seen. The daily Captain And The Kids debuted on October 1, 1934 and ran until sometime in 1939 (can anyone supply a definite end date?). It is likely to have been ghosted by Bernard Dibble for Rudolph Dirks.

For some reason, even though the Sunday version of the strip was very popular during the 1930s, the daily never took off. It ran in a very short list of papers.

Hi Cole -
Yup, that series is pretty darn obscure. Started on 5/28/17, and may have been the first strip to use the new King Features copyright. Ended sometime in 1919 (don't have a definite date on that).

Send me your email address, would ya?

Downstown by Tim Downs started in the Indiana University Daily Student college paper in 1975. Universal Press Syndicate picked it up on 3/24/1980 and ended 2/1/1986. These dates are based, respectively, on runs appearing in the New York Post and the Los Angeles Times. Anybody seen the strip running earlier or later?

Pat Sullivan is well-known as the creator of Felix The Cat. However, because of his bad treatment of Otto Messmer, who actually drew the Felix comic strip, a popular legend has grown that Pat Sullivan could not draw at all - that he just used his sharp business skills to co-opt Messmer's considerable talents. His lack of cartooning ability is not true, as the above sample of his work proves.

I won't rehash Sullivan's bio at length here (you can read a very well-researched account of his life in John Canemaker's Felix - The Twisted Tale Of The World's Most Famous Cat). Sullivan got his start in American comic strips by effectively duplicating William F. Marriner's cartooning style on Marriner's Sambo And His Funny Noises, a long-running McClure Sunday section feature. Sullivan also did several strips on his own, all done in the Marriner style - a few for McClure and some additional daily-style features for the New York Evening World. Great-Idea Jerry, seen here, ran 7/17/1912 to 4/5/1913.