Obscurity of the Day: Hollywood Johnnie 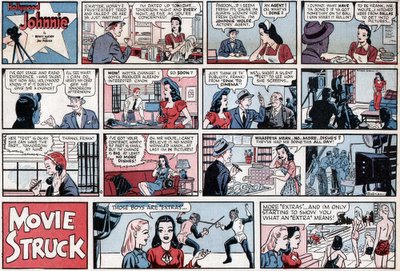 You gotta love the title of this strip. So evocative of the 40s. However, the original solicitations for the feature called it Hollywood Merry-Go-Round, and when it began running on 11/26/45, the title panel to the Sunday had the area where you see "Johnnie" in our sample blanked out. My guess is that the original title turned out to already be copyrighted and some last minute changes had to be made.

The title character was a small-time Hollywood agent, and his character swerves around between con artist and saint. Writer Renny McEvoy seemed a bit stuck for finding a direction in the storyline. The art by Jim Pabian, on the other hand, was excellent.

Poor Johnnie lost his star billing in April 1947 when the title was changed to Screen Girl. Apparently the title change wasn't enough to generate interest in the strip, and it ended on November 4, 1948.

Note in the sample the rare topper Movie Struck. Very few strips that began after World War II bothered with this convention of an earlier era.

Comments:
Hollywood Merry-Go-Round was a magazine in the early 40s/