Obscurity of the Day: Joco And Jack 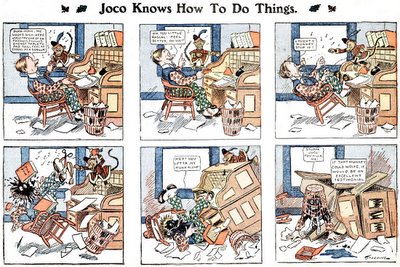 If I haven't mentioned it before, and I'm sure I have, I really love the World Color Printing syndicate. I even made a special trip to St Louis a few years ago to research the history of the company. Didn't find out a great deal. One thing I did learn was why they lost interest in their syndication business in the 1920s (it really nose-dived). Turns out they got the contract to print The Sporting News, a national weekly sports newspaper. The windfall of that contract seems to have ended their interest in providing a low cost Sunday comic section to small papers.

Anyway, today we have one of their earlier efforts. Joco And Jack started, as best I can tell from cross-referencing partial Sunday sections, on July 10, 1904. It was drawn by H.C. Greening. This seems to be the only installment he did, as the next known example is from July 24th, and the mantle has been passed to Ed Goewey. Goewey created new episodes on a semi-regular basis until September 11th. Then, on October 2nd we get another artist change, this time to someone signing themselves something like 'Jarrant'. The signature is all but illegible and I could be way off on that name. Goewey returns on November 13th, and the last known episode of the strip runs on December 25th.

Our sample today is the first installment from July 10th.

Comments:
This brings to mind a newspaper timeline
I read recently which gave the date of
1902 as the beginning of comic strip
syndication in newspapers, saying 1902 was when Hearst started leasing his comics to other papers. I believe you
said WCP began preprinting Sunday
sections around this time. Do you think
the 1902 date for comics syndication is
correct? What about McClure? others?