Obscurity of the Day: The Family Car 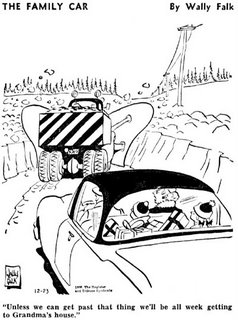 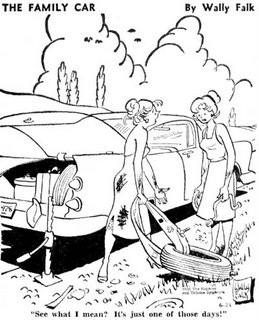 As you can read in the comments on the post below, our contest was over in hardly any time at all. Comics scholar Alfredo Castelli made it look easy when he correctly identified all seven titles. The correct titles are: 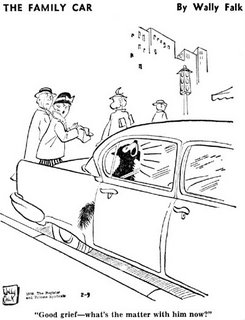 I figured if nothing else that Spence Easley would stump you guys for awhile, since it was a local strip at the time, appearing only in the Dallas Journal. Its creator, Jack Patton (forever famous in Texas for his Texas History Movies strip) abandoned the strip later in 1935, only to resurrect it in 1939-40 for the Register & Tribune Syndicate.

Okay, guys, think you're so smart? Tell me the original name of the Spence Easley strip, and the panel cartoon series that Patton ended to start it.

I had fully intended to show you a sample of Spence Easley when the contest was over, but you caught me napping. Haven't gotten around to scanning one in yet. Oh well. Instead we'll look at some great samples of an intermittently excellent panel series called The Family Car.

Wally Falk's Family Car ran from sometime in 1956 until sometime in 1961. I can't supply exact dates because the Register & Tribune Syndicate didn't even run the feature in their home papers. Sigh. Anyhow, Falk supplied the iconic 50s clean-line gag cartoon stylings to this panel, and those glorious tailfins abound. What also abounded, unfortunately, were 'woman driver' gags. Not just once in awhile, mind you, but practically every day. The samples here were some of the few I could find that weren't full frontal slams at women drivers, and yet even in these there is an undertone of amusement at the ladies behind the wheel.

Now I realize that these were very different times, and that 'woman driver' gags were in their heyday. But might the feature have had a longer run if Falk had mixed up a bit more? I think so. The drawing is excellent (he had a real flair for caricaturing the 1950s American land yacht), but the incessant gags about the woman driver coming home with a crumpled fender and explaining it to hubby begin to pall on you after awhile.

By the way, when Falk wasn't making fun of woman drivers in The Family Car, he had the thankless task of drawing endless headshots for The Country Parson, a gig he started in 1955 and gave up in 1962. He has no more syndicated credits after that point, and who could blame him for seeking alternative employment after drawing that many itty-bitty rev heads.

Lotta sharpies reading this blog. Don't know whether to be pleased or intimidated. How 'bout equal measures...

>OUCH!!!< That poor pooch with his tail trapped in the door! That's gotta be one of the most sadistic images ever published in a newspaper and the fact that it's cute and funny doesn't make it any less painful.

Hi Buzz -
Not to worry, I have it on good authority that Wally Falk did not draw from live models ;-)

Maybe this is the place to ask about the different titles of Bud Blake's panel cartoons fom the late fifties-early sixties. He ended his run on Ever Happen To You? and I believe his son said in an online interview that the original title was Comic Situations (for some reason I never got the last Hogan's Alley from my comic shop, so I haven't got their piece on Blake). But a little bit of looking in Newspaper Archives a couple of months back gave me at least three titles. Have you got all of those or should I send what I have got?

Hi Ger -
The weird thing about Bud Blake's panel cartoon series is that "Ever Happen To You?" and the multi-title series were both advertised in E&P. I have always suspected that they were one and the same, though. Here's the rundown on the E&P listings:

I can give you some of the titles he used on his multi-title series: