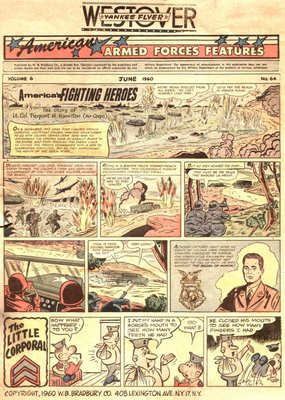 Is there a word that means more obscure than obscure? Well, if there is, the item above fits the description. This 8 page color comic section was issued in June 1960 by something called American Armed Forces Features, copyrighted to the W.B. Bradbury Company of New York. It's definitely a preprint section - the masthead for the Westover Yankee Flyer was obviously printed on later (and out of kilter).

All the strips are about military life, and all the ads are geared to men and women in the services, so the reasonable presumption is that Bradbury was trying to market this preprint section to military papers. I can't imagine that it was a success since this is the first I've ever found (on eBay a few weeks ago). However, you'll notice that it says "Vol. 6 Number 64" on the front page, implying that it was a going concern for a good long time. Has anybody seen more of these? Does anyone know any of the story behind this preprint section?

The features in this section are:

There is a military history research center in Carlisle, Pennsylvania that apparently has a run of the Westover Yankee Flyer newspapers. One of these days I'll have to go check it out.

This is a great find. I have been looking on e-bay for WWII cartoon material, but never came across anything like this. I hope you can find more and do an article in Hogan's Alley or post more pages here, so we can guess the artists.

My father was in an Army public affairs office during the Korean war and he had a number of old post papers that carried features similar to what you describe. The Medal of Honor winners, for example, were also available as single panel illos with accompanying text describing how and why they won their medals (usually getting killed in the process, I might add). I remember this vividly because we cut up most of those old papers for a 3rd grade class project I did on the Medal of Honor.

Hi Buzz -
Most likely the series you're recalling was in fact titled "Medal Of Honor". It was written by Arthur Curtis, drawn by Mike Arens. No relation to the one here as far as I know, other than the subject matter.

Recently Paul Tumey discovered Jack Cole was in the first few issues with a 1944/5 strip. He shows one o his Cole blog. Did you ever persue this paper?

Hi Ger --
The link, if anyone wants to see, is http://colescomics.blogspot.com/2011/09/there-was-playboy-and-also-army-jack.html

As for pursuing this paper, I'm afraid I haven't had the chance yet to make a stop in Carlisle PA, which is basically off the beaten path with just about anywhere you care to name.

The 44/5 thing was a typo. As Paul T. menions it is interesting that this was Xole's last comic strip thing before being accepted at Playboy. I have found and bought one on ebay, probably the same Paul has. I also found a copyright notice to the AAFF from 1965/6 (no typo this time!) so this ran a lot longer than I thought!

Silent Sam is by cartoonist Ben Wiseman. He did a couple and the ones I have seen he signed Wiseman as well. I showed them on the Facbook page of Dennis the Menace's Al Wiseman's duaghter and she confimed it was not by her father.