Obscurity of the Day: An Embarrassing Moment 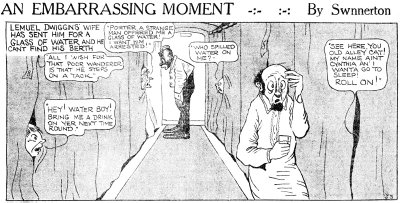 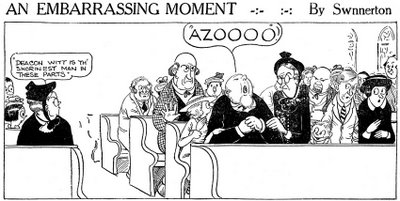 There was a well-known Hearst series titled Embarrassing Moments that ran in the 20s and 30s. Among the luminaries that worked on that series were Billy DeBeck and George Herriman. What few people know is that it was actually a revival of an earlier Hearst series, An Embarrassing Moment. The original series started 3/2/1916 in the New York American, and was a tag team affair by A.C. Fera (better known for Just Boy, aka Elmer) and Fred Locher (Cicero Sapp). The joint effort only lasted a week, and then the series disappeared for five months (though it may have been running in papers outside New York). Locher resumed the series as a solo effort on 8/25/1916, but it was passed off just two months later to Jimmy Swinnerton (who supplies all our samples). Swinnerton produced the strip until July 1917 for the American, though it ran there only sporadically. It seems to have been produced and run in other papers on a more frequent basis.

The second and more famous series started sometime in 1922.