Obscurity of the Day: The Big Parade 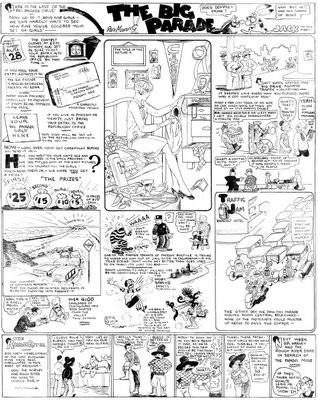 Billy Ireland is the undisputed originator and king of the local-interest Sunday page (see his The Passing Show blogged here), but he was by no means the only practitioner of the craft. Here's a pretty faithful copy of the feature called The Big Parade. This page ran in the Arizona Republican (later shortened to the Arizona Republic when it became unfashionable for papers to wear their political leanings on their sleeve) from 1926 to 1948.

Reg Manning conducted the Big Parade, and he was also the editorial cartoonist of the paper. Manning gained a certain amount of fame as the author of such Arizona-centric books as What Kinda Cactus Izzat? and The Cartoon Guide to Arizona.

An interesting part of this feature was that a continuing storyline comic strip ran along the bottom for quite a few years. Titled The Rough Riter, it is humorous adventure in the vein of the Gumps.

Comments:
Allan, I somehow thought -- because of Ireland, I'm sure -- that these full pages were always particularly mid-western, so it was interesting to see Manning's contribution. I don't know how your Ohio list reads, but other than Keys, there was Harry Westerman with "Cartoon Events" at the Ohio State Journal; Leland McClelland with "Cartoon Parade" at the Columbus Citizen (drawn til '59); "The Once Over" by O'Dell Dean, Dayton Daily News, ca. 1920s (and more?). Leo Egli also did one in Zanesville (OH), but at this moment can't find the clips for a title. And all these were editorial cartoonists, primarily, except for Dean, a staff artist who occasionally contributed to the editorial page.

Hi Frank -
I don't have Westerman, but I think I have seen it - dim memory says that I felt it was too editorially oriented to qualify for SG listing. I do have The Cartoon Parade (37-59).

Dean and Egli's I haven't seen.

Another page from out west was the untitled one by Doc Bird Finch for the Denver Post. I have examples from the 20s and 30s, and I saw one on eBay supposedly from the teens as well.