Obscurity of the Day: Hope and Experience 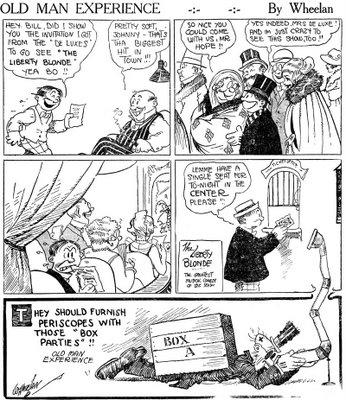 Before his great success with Minute Movies, Ed Wheelan had struck less impressive paydirt with a feature titled Hope And Experience. The feature started on December 10, 1915, and it was Wheelan's first continuing series for Hearst's New York American.

Although Wheelan tried out a number of other features in the pages of the American, mostly in 1916, this is the only one that really stuck. The feature, as you can see in the example, featured Mr. Hope and Old Man Experience. Hope was a young optimist who always got the short end of the stick, and Old Man Experience then provided his jaundiced reflections on the state of the world.

The feature was renamed to Old Man Experience in 1917, and ended on April 6 1918 as Minute Movies (then Midget Movies) was taking off.