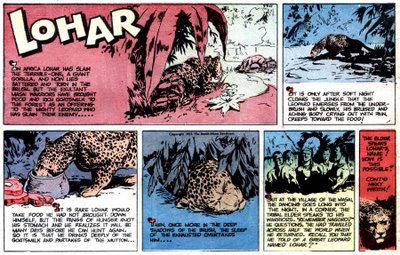 I saved the best for last. Lohar is the story of a leopard, and it is as well-written and drawn as it is unusual. I can't think of another strip that chronicled, in a serious manner, the life of a wild animal (surely I must be forgetting one?). Yet it seems like such a perfect subject for the comics page.

The story of Lohar, credited to Tom Brady, is so interesting that I had to take the time to read quite a bit of the continuity while I was indexing the Courier microfilm. It's a luxury that I seldom allow myself in the rush to get as much indexing done as possible on my research trips. Lohar is a strip that I would love to see reprinted in its entirety - most likely an impossible dream since the source material is so rare, and even the microfilm record is far from complete.

Lohar started with the Smith-Mann comic section in 1950, and lasted until October 18, 1958, long after the color section folded. Later strips were copyrighted by Eric Jon Associates -- I have no idea what that is.

I have to disagree... all of these strips deserve a reprint book. After having been told there were almost no black comic strip artists, it is shocking to see so many together. Surelu there must be some fund somewhere that would subsidize a reprint/history of these newspaper stips.

As for comcis with animals as animals I can remember two.. there was a short run of real life bear stories by Syd Shores in the late forties Timley western books. And more recently there was a comic book series about the life of dinosaurs that was quite good.

Hi Ger - seems to me that if you need a grant to subsidize a reprint project then the project perhaps wasn't worth doing anyway. If there's an audience for the material then the profit motive will take care of things. I'm not a fan of government and institutional art subsidies. In our age of disposable income, good art will find a paying audience.

Regarding animal comics, I was thinking just in terms of newspaper strips. With comic books it seems like there's few things that haven't been tried at one time or another.