An Obscurity and a few Updates 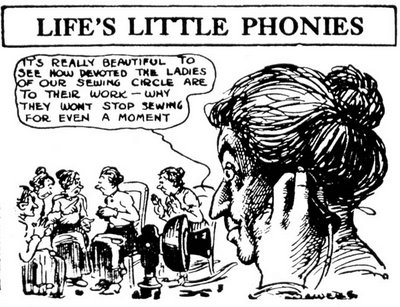 Here's a real obscure item called Life's Little Phonies. It ran in 1915 from an unknown syndicate (but my spidey sense tells me that it may be Wheeler Syndicate). The cartoonist, if I decipher the scrawl correctly, is Bowers. There was a Joe Bowers who did Dizzy Dramas, don't know if this is the same fellow.

What I find interesting about this little panel cartoon series is that the joke, and there really is only one, is based on the novelty of the telephone. New users of this wonder quickly realized that the telephone gave them a measure of anonymity in their conversations, and these cartoons are all about phone users taking advantage of that situation to lie.

Update1: Jeffrey Lindenblatt tells me that Deathless Deer, discussed two posts ago, did indeed run a little longer outside the NY Daily News. Long Island Newsday, presided over by Alicia Patterson, who was also the writer of the strip, ran the feature until August 7 1943, several weeks more than the News. But that brings up the question that if the strip was available through August 21st, why would the paper owned by the strip's writer not run it to the bitter end? Jeffrey and I thought perhaps that E&P just got the end date wrong, but on the other hand, we know that strips are normally produced a minimum of six weeks ahead of their running dates. Since the News cancelled the strip abruptly, why would there have only been another three weeks of material available? It makes far more sense for the end date to be August 21. So the question still stands - can someone find Deathless Deer running to the supposed end? And if that end is really on August 21, why did Newsday drop it early? Curious, very curious.

Update 2: Todd Hillmer takes up the slack from my sloppy notes by sending me a sample of How Do They Do It? from 1917. So it definitely started that early. Thanks Todd!

Comments:
There's also Charles Bowers, who in about 1915 or so began working on the animated version of the main Wheeler strio, MUTT & JEFF. I've seen samples of Bowers' drawing style and this could be him.

Hi Frank -
Well, your ID meshes perfectly with my assumption about the syndicate. Sounds like kismet!

I. Klein said some things about Charley Bowers in his col in CARTOONIST PROFILES - and for those really interested, Bowers has some of his live action film out on CD-- you can also find out more about his animation work in BEFORE MICKEY, and others. Comic strip, animation, live action comedy; he got around.

I have a large scrapbook filled with Aladdin Jr's and a complete or nearly complete run of deathless dear as well as announcements about the strips. quoting:

"following the action of the new york daily news june 20 announcing the discontinuation of the...strip to reduce newsprint consumption the chicago tribune - ny daily news syndicate ...is suspending the strip on the decision of the author and artist."
...
"The syndicate informed its newspapers that the last mailing had gone out with strips dated through Aug 21. Newspapers were free to continue it until then or suspend at any time."

If you want to buy the scrapbook let me know.

Sorry- last strip i have is 7/18. also if you google deathtless deer you'll find a letter fromAlicia to her father indicating their bad relation ship probably was at the heart of the strip's eatly demise

don- please contact me about deathless deer, if you read this. I have some original materials also.