Obscurity of the Day: Asparagus Tipps 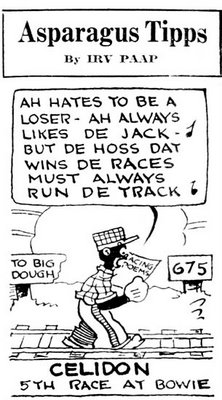 What a great title! This little horse racing tip panel was syndicated by the Graphic Syndicate, and was variously attributed to Irv Papp and someone who preferred to be known only as 'Tony'.

The panel had limited interest outside New York so it is rarely, if ever, seen outside the Evening Graphic. Its main reason for being was to give plungers a hot tip of the day for a New York area track. To garner interest outisde New York, a lucky number was also included (for those whose gambling obsession ran to the numbers games). Unfortunately, the creators didn't take into account that numbers games were played mostly in the black community, so the racist depiction of the panel's star didn't exactly endear the feature to black readers.

Asparagus Tipps started sometime in 1926, and lasted until at least 1929.

Comments:
For some reason I thought Will Gould (of Red Barry fame) was behind Asparagus Tipps. Do you know if he worked on an earlier or later version of this title?

Thrillmer, your comment tickled the far-reaches of my memory. I did some homework on the subject, and will answer your question at length in tomorrow's post. Stay tooned!