Obscurity of the Day: Efficiency Ed 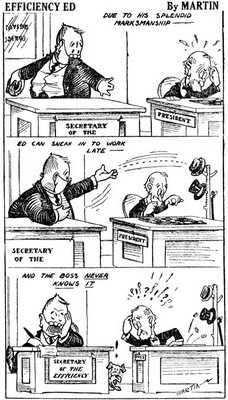 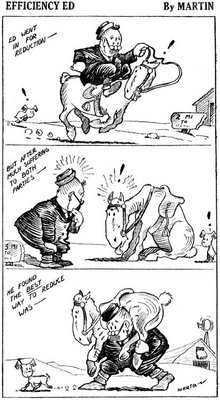 This delightful strip had a criminally short run; just a little over two months.

Edgar Martin was still the new kid on the block at NEA when he came up with Efficiency Ed in 1922, two years before he created the classic Boots and her Buddies. The strip began on January 2nd and ended on March 18th when Martin took over The Nut Brothers from Gene Ahern.

The efficiency expert was a new profession, borne of the assembly line. Their jobs were to ensure that production lines moved along as smoothly as possible, with no wasted motion of operator or item being manufactured.

The efficiency expert was looked upon with loathing by workers. Not only did the profession seem to dehumanize labor, it was often responsible for eliminating jobs through increased efficiency. Those who were lucky enough to keep their jobs found their labor now quantified with quotas and benchmarks. These systems punished workers for low production, and the reward for higher production was often nothing more than further increased production demands.

Most of the humor concerning efficiency expertswas pretty rough stuff since there was no love lost for these individuals. Edgar Martin, however, opted for a softer approach in Efficency Ed. Ed is a pretty loveable fellow, and his desire for efficiency is treated more as a loveable quirk of character than something sinister. Martin makes it obvious that Ed is no real threat when he engages in a long sequence where Ed tries to apply principles of efficiency to catching a mouse in his home. The mouse, of course, outwits him at every turn. I think that Martin could have had a nice long run on this strip if the syndicate had stuck with it.