Obscurity of the Day: Hy Score 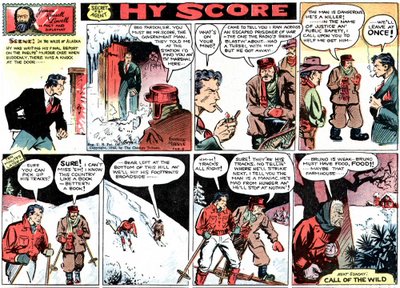 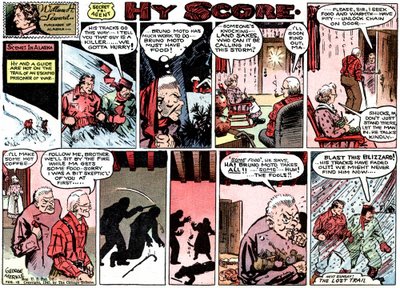 This post was written in pain. A certain fast food joint (whose logo just might include a red-haired girl) served me a caesar salad today. Said salad was apparently made by an employee who thought those signs in the restroom about washing hands were mere suggestions. So if this post is made in haste my apologies. The porcelain goddess calls (and calls and calls...).

Hy Score was one of the new features introduced in the Chicago Tribune Comic Book. In 1940 the Trib inaugurated a new Sunday feature in addition to their regular comic section, a pair of standard newspaper sheets that when folded and cut formed a 16 page "comic book". The new addition was presumably added in response to the burgeoning popularity of newsstand comics. I guess the Trib thought they could connive kids into begging dad to buy the Tribune just because they'd be able to cut apart the funnies to make a little booklet.

As unlikely as it seems, I guess the comic book was somewhat of a success because it remained a part of the Tribune for three years. The gimmick had to be what kept it alive, because the contents tended to be less than inspired. Case in point is Hy Score, which was added to the comic book on June 30 1940. At first this feature was truly awful, with ridiculously text-heavy narratives and exposition laden plots.

Mr. Score was an FBI agent who got into all the familiar scrapes of the genre. He solved murder mysteries, foiled espionage, and generally brought all sorts of miscreants to justice. The strip was penned by George Merkle, of whom I know nothing. Merkle's stories improved over the life of the strip, as he slowly but surely pared away at the paragraphs long captions. His art was alright, except that he had a real blind spot (heh) about drawing eyes. Most of his characters run around with eyes firmly shut, and when he did attempt to draw them open you can understand why.

Hy Score must have had a little bit of a following, because it actually managed to outlast the Tribune comic book, albeit for just half a year. The strip was put to bed on 10/31/43.

And now if you'll excuse me, I must once again call Ralph on the commode-a-phone.

Comments:
According to Jerry Bails "Who's Who of American Comic Books" George Merkle was a pen name for George A. Marko.
Marko did comic books from the late 30s to the mid 40s. His comic strip credits include also include something called "Mighty O'Malley" 1947 - 1949.
From elsewhere he supposedly did a 1945 comic strip called "Underground".

By the way, though it is belated, I want to wish your high entertaining and educational blog a happy one year anniversary and thank you for the effort for the past year.

Thanks much DD for the anniversay reminder!

As for Merkle, you caught me in the throes of intestinal distress, unable in my delirium to do proper research. Yes, you're absolutely right, Markle did indeed do "Underground". He also did "Stories Stamps Tell" back in 1935. I haven't, however, heard of "Mighty O'Malley". Anyone?