Obscurity of the Day: Jolly Jumpers 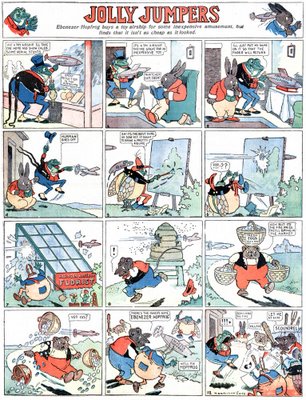 Hard to believe that anything by Harrison Cady could qualify as an obscurity, but yet here we are. The Jolly Jumpers Sunday pages were produced for the mysterious Publishers Press syndicate. I have found precious little information about this company, or it's manager C.J. Mar, to whom all the strips were copyright. I do know that Mar was in 1910 a manager of the Hearst Syndicate, and this new venture was I gather his bid to start his own newspaper syndication company. Publishers Press also seems to have gone by the name Western Newspaper Syndicate during its short life.

Whatever the name, the syndicate seems to have been started in July 1911 with just one strip - Zoo-Illogical Snapshots by Harold Knerr. Harrison Cady came on board with Jolly Jumpers on May 19 1912, at first signing the strip as Gordon Curtis. Cady soon dropped the nom de plume. Jolly Jumpers was often run as a half page with another Cady effort filling the remainder. There were a number of these, including Bunker Blinks, Jungle Jinks, and the earliest comic page appearance of Peter Rabbit.

The syndicate and the strip ended sometime in 1914, having run in just a few major papers (Boston Post is one, and they dropped it early on). The syndicate actually produced enough material for a full comics section, but the only paper I've ever found that ran their section in its entirety is the Bellingham (WA) American Reveille. Sadly, the microfilm for this paper includes only a scant few of the comics sections.

If anyone knows more about C.J. Mar, Publishers Press, or knows of papers that ran the complete section, I'd love to hear from you.

Comments:
Hello, Allan---The St. Paul Pioneer Press ran the the whole four-page section in early 1913. It's a pre-printed section, on different paper than the rest of the paper, and the SPPP's masthead printed in odd approximation type.---Cole Johnson.