Obscurity of the Day: Kessler Cartoons 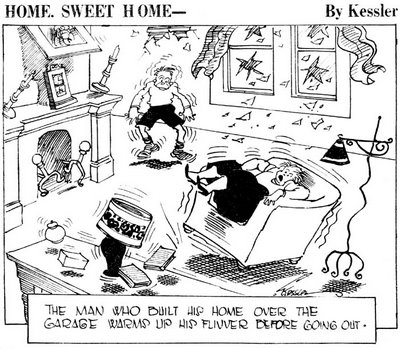 Best of luck to anyone trying to track the career of Camillus Kessler. Here was a guy who was all over the map, usually treading with little cat feet that leave little mark.

Kessler first pops onto the radar doing a few short-run comics in St. Louis in 1904-06. He then goes on to do editorial cartooning for the St. Louis Times for some period (I can only vouch for 1911, but my files are scanty, as they are for all of Kessler's output).

Kessler hit the big time (or semi-big time, anyway) when he got his start at the New York Press in 1914 during that paper's short-lived bid to become a major player. The Press added a whole litany of special features that year (including their own homegrown Sunday comics section), and Kessler found work doing weekly half-page cartoons to accompany the poetry of Frank M. O'Brien. This feature ran just six months.

I lose track of Kessler now for a full six years, but I suspect he might have been doing editorial cartoons for the New York Globe and Advertiser for some portion of the time. In 1922, though, he first pokes his head onto the national stage with a new syndicated panel feature for the Metropolitan Newspaper Service. The panel is in the Briggs-Webster mode with no traditional title, rather a revolving set of titles keyed to the subject of the day.

The titles are mostly standard issue, following closely on the models of his betters. Big Moments in Little Lives, Home Sweet Home, Making The Grade, Into Each Life Some Rain Must Fall, One Man In A Thousand, etc. His one title that breaks the mold is At The Bottom of the Ladder, wherein Kessler tells an anecdote from the lives of great men and women, usually from their childhood or early experiences, and accompanies the story with a suitable cartoon. These cartoons were collected in a massive reprint volume in 1926 by Lippincott.

Kessler's panels were dropped by Metropolitan in 1925, but he took the feature over to the New York Evening Graphic, and they continued it until November 1926. Then he made another syndicate jump, this time to the bottom of the barrel Payne Syndicate, which syndicated the feature for awhile in 1927. The panels produced for Metropolitan, though, are resold to reprint syndicates who will hawk them to small papers for decades to come.

Kessler's back in the big time in 1928, now with a matrimonial strip titled In For Life for the New York World. The big time's call, though, is fleeting. The strip lasts for less than a month.

Kessler next finds the Bell Syndicate willing to revive his panel cartoon, this time as a weekly feature. The new weekly run extends from 1930 to 1932. Bell has better success with a new Kessler daily panel titled Twenty Five Years Ago Today. This feature lasts at least through 1935, and possibly later.

Once agin Kessler disappears for awhile. In 1939, though, the Consolidated News Service brings his panel back one last time. Here Kessler goes with a regular title, Seems Like Yesterday. Restless as always, though, the official title is changed to Home Town Echoes around 1942, and soon reverts to a revolving set of titles, bringing things full circle. I've only seen this panel running on a weekly basis, but it was advertised as a daily. The panel was advertised through 1950, but I've never seen any later than 1944.

Kessler's artwork remained consistent throughout his career, workmanlike but with no stylistic flourish or panache. His gags are of the 'smile and nod' type, seldom if ever going for the big laugh. He was often grasping for the nostagic deja vu effects that were mastered by Briggs and Webster, but rarely succeeded as well as them. But if Kessler was a minor figure in cartooning lore, we have to give him his due - he was a working newspaper cartoonist for nearly fifty years, and how many can make that claim?

Comments:
Nice blog, I didn’t know of it. Though, it is what I was looking for. A case of serendipity.
I’ m Italian, I am very fond of comic strip and dream to become a scholar like you in this matter. I write some review about classic comic strips having a look on the Italian scene too. You can find them on www.lastriscia.net , a site where you may see some Italian comic strip from a group of authors I collaborate with.
Together with a friend of mine, Giuseppe Scapigliati, a skilled cartoonist but also a great collector of original comic strips (perhaps you have heard of him), I am thinking of a blog like yours dedicated to comic strips. Obviously, for Italian readers. May we count on your help?
You are on my bookmarks, all my compliments.
I beg your pardon for my poor english.