Obscurity of the Day: Little Johnny and the Teddy Bears 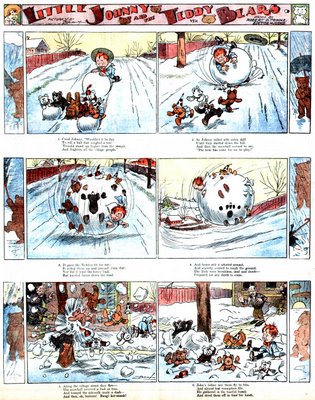 Little Johnny and the Teddy Bears (9/1/1907 - 2/28/09) is one that makes me scratch my head. Not for the subject matter, which was nothing particularly noteworthy. We have a kid whose teddy bears have come to life. Their misadventures are told in rather pedestrian verse, supposedly to appeal to the younger kids. (By the way, I don't recall having any particular preference for stories told in rhyme as a youngster - I'm not sure how this convention originated in the funnies.)

What's odd is that this Sunday comic strip was copyrighted to Judge Inc. (the noted political humor magazine), and the verse was written, at least initially, by Robert D. Towne, the editor of the magazine. Now anyone who has read Judge would agree that it did not cater at all to juvenile audiences, so I don't really see why they would have been producing and distributing this sort of strip. I've read a few episodes of the strip, thinking that maybe the teddy bears are a commentary on Roosevelt, but I see no undercurrent of political opinion.

Anyway, the strip seems to have been distributed by the North American Company (syndication arm of the Philadelphia North American), and the strip was very well-drawn by J.R. Bray, later to make a name for himself in the animation game. Robert Towne wrote the verses until March 1 1908, then Constance Johnson took over the duties for the remainder of the run.

The strip either wasn't marketed all that well, or the subject matter didn't appeal, because you won't find this strip running in very many papers. On the other hand, until the 1910s it was a bit unusual for papers to mix strips between different syndicates in their comic sections. Most just bought the standard 4 pages of material from one source and didn't put any brain juice into picking and choosing the best individual strips. So an oddball strip like this, sold as a special item to take over the front page of a paper's comic section from the regular fodder probably caught a lot of editoors wondering, "Why bother?"

Comments:
Nice blog, I didn’t know of it. Though, it is what I was looking for. A case of serendipity.
I’ m Italian, I am very fond of comic strip and dream to become a scholar like you in this matter. I write some review about classic comic strips having a look on the Italian scene too. You can find them on www.lastriscia.net, a site where you may see some Italian comic strip from a group of authors I collaborate with.
Together with a friend of mine, Giuseppe Scapigliati, a skilled cartoonist but also a great collector of original comic strips (perhaps you have heard of him), I am thinking of a blog like yours dedicated to comic strips. Obviously, for Italian readers. May we count on your help?
You are on my bookmarks, all my compliments.
I beg your pardon for my poor English.

Hi Max -
Always room for one more in the blogosphere! Please let us know when you start your comics blog and I'm sure we'll all come over to take a gander.

Hello, Allan---LITTLE JOHNNY AND THE TEDDY BEARS originally was the feature on the back page of Judge magazine. In 1909 Judge launched their own short-lived comic syndicate,reprinting their old strips, mostly with recurring characters like James Montgomery Flagg's NERVY NAT and C.W. Kahles' THE YARNS OF CAPTAIN FIBB. Bray was there again, only with a new feature, LITTLE JOHNNY AND THE TAFFY POSSUMS. ("Billy Possum" was the long-forgotton William Howard Taft equivillant of the Theodore Roosevelt "Teddy Bear") It looks like Judge only syndicated four half-page strips a week.---Cole Johnson.

Hi Cole -
I've never seen Kahles' Yarns of Captain Fibb or Bray's Taffy Possums in newspapers - where did you find them?

I have three of these cartoons that i purchased at an estate sale - would you know their worth? They are in plastic with cardboard for stability and in great condition! Thanks!