Obscurity of the Day: Optimistic Oswald 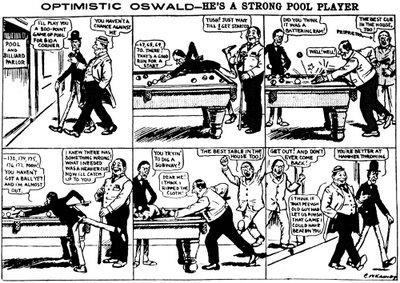 Perennial and prolific comic stripper Charles W. Kahles produced Optimistic Oswald for the New York World just a handful of times from 11/4 to 12/5/1912. The strip may well have been intended as a Sunday feature - the panel layout and size of the caption text seems more suited to larger Sunday reproduction. However, it was one of the few features that ran in the morning edition of the daily World (as opposed to the evening editions which were chock full of cartoon treasures).

The premise is as standard as it comes for the era. Give your lead character one standout trait, in this case naive optimism, name the strip after the trait, and fire away. Strips with such simplistic premises as these had limited lifespans, but that was an accepted mode in those days, and helped to fuel the fierce creativity that was rampant on the daily comics pages. Sure there were lots of clinkers in the load, but there was also the occasional gold nugget among the coal. Optimistic Oswald is decidedly of the carboniferous variety.