Obscurity of the Day: Things To Come 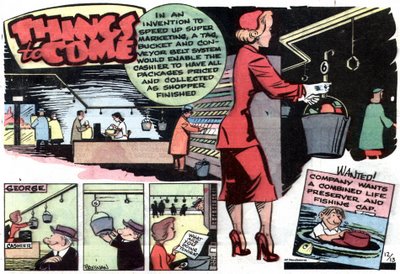 The American fascination with technology came to the comics not just through Buck Rogers and Flash Gordon. There were also more down-to-earth features that sought to emulate the style of such magazines as Popular Science. Things To Come, perhaps the first feature to regularly concentrate on speculative technology, was later joined by the more outlandish Closer Than We Think (blogged here) and the very successful Our New Age.

Things To Come, named after the H.G. Wells book The Shape of Things to Come (which you can read in its entirety here) , was an Associated Press Sunday feature that started in 1941 or '42. It was written and drawn by Hank Barrow, whose masterful work deserved a far larger audience than it received. Barrow left the feature in 1949 or 1950 and it was taken over by Jim Bresnan, whose style, shown here in our sample, was bold and appealing.

For reasons unknown the AP Sundays were never good sellers, and Things To Come was no exception. It really is a shame that this excellent feature was never exposed to a wider audience. The feature ended on January 30 1955.

Comments:
Barrow also did editorial cartoons for AP in 1936 when Sickles was doing them. Both were succeeded by Morris. Barrow then took over Caniff's The Gay Thirties in a style that was remarkably close to Caniff's previous one.