Obscurity of the Day: Viewpoint 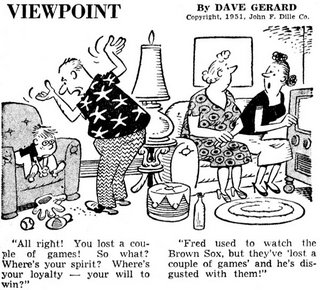 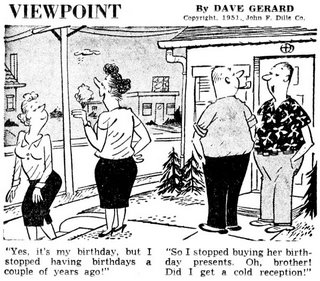 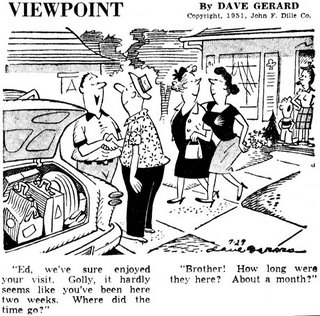 Before Dave Gerard brought his magazine cartoon Will-yum to the daily comics page, he created the panel cartoon Viewpoint. This panel in a way harkened back to the days of top hats and corsets in that it employs a 'he said-she said' narrative, much out of vogue by the 1950s.

Viewpoint began on January 9 1950 and from the start was viewed by most newspapers as strictly filler material, not worthy of a regular daily spot on the comics page, but used most often to plug a hole elsewhere in the paper.

To go along with its caption heavy style, Gerard renamed the feature to the klunky It's All in the Point of View on March 3 1952. This move, hardly a marketing plus, was probably at the insistence of some syndicated newspaper columnist who shared the original title.

Either Gerard or the Dille Syndicate came to its senses in 1953, and gave Viewpoint the heave-ho. It was replaced by Gerard's Will-yum, which had some success as a recurring magazine cartoon in The Woman's Home Companion, and ran with decent success for almost fifteen years.

Comments:
Hello Allen:
in looking at viewpoint I thought I saw the style of a cartoon book I use to have that was about hunting and sports. I specifically remember duck hunting and fishing cartoons in it. The characters were a lot like these in viewpoint. Is there another artist of a similar style? Or was is Gerard?

I'm going to take a wild guess that you're thinking of Woody's World by John Holm. Similar style and about hunting and fishing. A reprint book of that was published in 1968.