Obscurity of the Day: Funny Fables 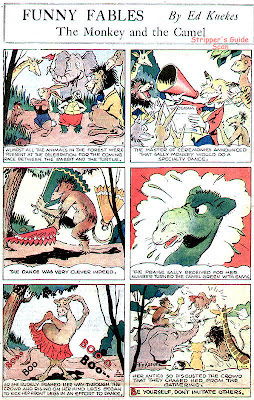 Ed Kuekes main claim to fame is the comic strip Alice In Wonderland, which ran in 1934, and then seems to have been sold in reprints at least through 1938. That classic but short-lived strip was syndicated by United Feature. Kuekes also is credited with a daily panel titled Do You Believe that was syndicated 1955-62 by Lafave Syndicate, but I've never found a sample of that feature. Anyone?

Other than those syndicated titles, Kuekes only other strips were ones that he did for the Cleveland Plain Dealer. Here we have Funny Fables, a delightfully drawn Sunday strip that was shoehorned in to a quarter page space in the PD's magazine section. It is known to have run in 1935, but I don't have specific dates yet as I'm still indexing the PD material from this era.

Comments:
Do Mort Williams and Family by Hayle or Dan Dearson, Freedom's Son by Walter Galli mean anything to you?

Sorry, means nothing to me.

I recently bought the first issue of a 1940 magazine called Friday. A tabloid sized magazine, whoch was sold folded with a cover on the folded side, so at first it looks like a normalsized magazine. The first issue was published march 15 1940 and promised weekly issues after that. How many were published I don't know. The publisher was D. S. Gillmor later known as a cmic book publisher and one of the two editors was Lev Gleason, also later know for his comics work as a writer and editor. The magazine was fact-based with a hint of satirical entertainment and was meant to present the case for the United States non-involvement in the war. It was pro-union and anti-war and promised to show up the pro-war propaganda in the other media. It also included a weekly comic page, consisting of two black and white comic series, drawn in a way to resemble a sunday paper comic page. Mort Williams was two tiers with a large drawn title head, whoch almost seems like a third tier. Dan Dearson was three tiers. Hayle turns up in one of the Mad magazine imitations of the late fifties. Walter Galli lead me here when I googled, because he is mentioned in one of your search lists - I just couldn't find which, although google says it's the B-list. Galli has a pretty but boring style, that has a Bill Elder-like quality to it. Not a bad comic artist as far as I can see.

Walter Galli knocked around the newspaper strip industry in the 30s, and was syndicated at least twice, with "But It's True" and "Stranger Than Fiction", both Ripley's type panels. E&P directories also credit him with "Oddities" and "Big Little Things", neither of which I've ever found in print.