Sorry about the quality on these. The extensive use of Benday makes it practically impossible to clean them up.

I'm back on the road for a business trip, so it's time to take a break from the regular posts and enjoy an interlude with a strip from yesteryear. This time I've picked out Roy Powers. The strip was syndicated by the Philadelphia Public Ledger and was credited throughout the run to one Paul Powell. This was a pseudonym, I'm told, for Paul Roberts. But that doesn't help much since I don't know who Paul Roberts is. Anyway the writing, which is not exactly high-caliber is of little concern with Roy Powers. It's the art by Frank Godwin, Kemp Starrett and Charles Coll (and occasional other, lesser, talents) that make this strip. The art was never credited, so it's an exercise in art spotting.

I think the story that starts here today (which originally ran starting on January 2, 1939) must be Godwin, but I'm open to being corrected. Interesting side note to Roy Powers is that the strip used what we normally think of as story numbers (you can see the series here starts at K-1), but in reading through the material for 1939 I found that the stories don't really begin and end in time with the letter changes. Kinda weird - wonder if they refer to something else? If the letters all ran the same number of strips I would assume that they were just some sort of internal reference, but the 'story letters' range anywhere from 4 week to 19 week runs.

Comments:
This is one of the super-fun strips to read (and just look at). I agree that it's Godwin. Jimmy Thompson also did a short stint on it. Love to see as much as we can of this one.

That sure looks like Godwin to me. Great choice, I look forward to seeing more!

Hallo
part of the strip was published in Czech Boy Scout magazine "JUNAK" 1947 before communist destroyed democracy and boy scouts.
Do you somebody know at which magazine have been published first? We suppose in Famous Funnies #38 September 1937.
Regards Paul stapanull@seznam.cz

Obscurity of the Day: Lord Longbow

Lord Longbow is one in the long line of entries in the blowhard tale-telling adventurer genre. In a category more-or-less invented by the real life Baron Munchausen (read an article about him here in Wikipedia), comic strips and cartoons have used the concept over and over. From one of the earliest animated cartoons, Colonel Heeza Liar, to Major Hoople, to the Underdog show's Commander McBragg, to the latest slightly off-kilter Baron wannabe, Franklin Fibbs.

Lord Longbow was created in 1907 by Richard Thain for the Chicago Daily News. The Daily News' claim to fame is that they were the first newspaper to syndicate a daily budget of comic strips and cartoon panels (starting in 1901). Thain was part of the regular stable of workhorse cartoonists at the News and created lots of other series, but Lord Longbow was by far his longest lasting contribution. Thain first appeared on the News daily comic page in early 1907, and his specialty was substituting for other cartoonists on their features. This was a pretty common practice at the News, and a major headache for a certain bleary-eyed researcher who had to decrypt the tiny blurred signatures on all the strips every single day.

The first Lord Longbow strip ran May 13, 1907, and Thain kept the series going through November 4, 1907. It then disappeared for over a year, finally returning on January 9, 1909. Though Thain was still cartooning for the Daily News, the strip was revived by a fellow who signed himself Rankin. Rankin shares essentially the same story as Thain - he started with the News in 1907, and created many series of his own in addition to subbing on other established strips. Rankin kept Lord Longbow running thorugh August 23, 1915, with occasional subs by (who else?) Richard Thain.

Lord Longbow was syndicated by the Chicago Daily News at first, but the News joined the Associated Newspapers cooperative syndicate in 1911/12 and thereafter the strip was distributed through their auspices. For a long while in the teens the strip was copyrighted to W. Werner. I haven't been able to determine who this is, but the typical practice at the time would indicate that it was probably someone in the front office at the Daily News.

Can anyone positively identify W. Werner, or supply a first name or biographical info on Rankin?

Comments:
Concerning the mystery “W. Werner”: I too, tried to discover who he was, with no results; I looked thru the indexes of the books on American journalism I own, but no use. If it may be of help, for what I know his copyright begun to spring up around 1913 on Frink’s “Sammy Spankem” and on Ted Brown’s “The Inventor” (you surely know these strips; in the improbable case you don’t, I can send you scans for your blog) and, as you wrote, on the “Lord Longbow” series; simultanously it appeared on a series of tales not in comic form, with generic titles such as “This Week Complete Story”, “A complete Story”, some of which with a woman as a main character. Another series of daily short stories, “Today’s Evening Story” begun around 1921. Last traces of the “Copyright by W. Werner” statement in my clippings date 1923.

Hi Alfredo - yes, those other strips were also produced at the Chicago Daily News. I'm betting the text features originated there too. Unfortunately there is no history of the CDN that I'm aware of, otherwise I'm sure we'd find that Mr. Werner was somebody of importance there.

I have checked all my other Chicago newspaper histories in the hope that they mention him, but no luck. 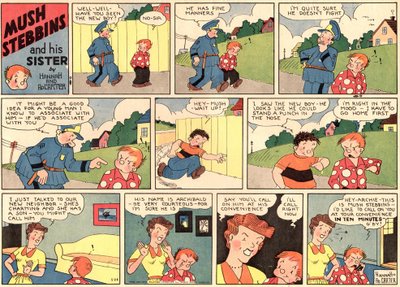 Augustus "Ad" Carter's Just Kids began losing papers at a good clip in the 1940s. Even the Puck section dropped the strip in the early 40s. Carter had been doing this strip and it's predecessor, Our Friend Mush, since 1915, so it's not particularly surprising that the quality of the strip began to ebb.

Until recently the latest Sunday I had for the strip was from 1947, but I just recently came across a few examples from 1953 (one of which is shown here). You'll notice that the strip was retitled to Mush Stebbins And His Sister; that change took place in 1950 according to the E&P listings. You'll notice also that the sample strip is credited to Hannah Carter in addition to Ad. That could well mean that Ad had retired, but I don't know, and I also don't know who Hannah is - wife, daughter?

E&P continued to list the strip as late as 1956. Has anyone seen an example from that late? Can anyone shed light on the situation with Hannah, and whether Ad was still actually working on the strip?

Comments:
"Ad" Carter was Augustus Daniel Carter, not the political cartoonist Robert Carter. He died in 1957. I believe Hannah was his second wife. He was previously married to Florence Hampton and had a daughter named Hope. I don't have any information about Hannah contributing to the strip.

Thanks; I always mess that up.

Hannah was his third wife. Florence, his second. Next I'm going to correct Wikipedia to reflect this :) I'm Ad's granddaughter, daughter of Hope, the child from his second marriage. Unfortunately Ad died before I was born so I never met him. Thank you fro much or keeping his memory alive. It helps me to know my grandfather a little better. 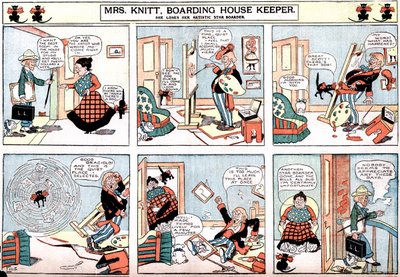 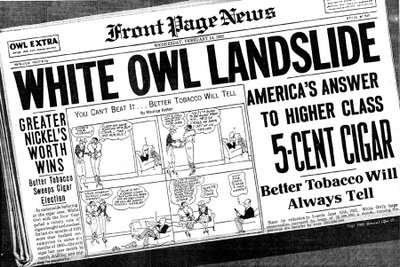 Back from the ballgame, and no third degree burns! Skies were partly cloudy, so all I have to show for my spring training date is a rosy nose and a sore butt (man, those bleacher seats are hard). And my Rays spanked the Pirates 7-4, but the victory was a bit hollow because few of the Pirates regular starters were playing, though we did rack up 4 runs against their young phenom pitcher, Zach Duke.

Anyhow, back to important things, eh? The daily posting streak remains alive today with a quickie, cause I'm a bit shagged out this evening. So here for your viewing pleasure is a seldom seen newspaper ad by cartoonist Maurice Ketten (known in his native Italy as Prosper Fiorini). Ketten was a mainstay at the New York World from 1907 to 1934. He produced a witty daily cartoon for the World, and the cartoon was eventually syndicated under the permanent title Can You Beat It?

This *kaff* White Owl cigar ad ran in 1932, and features an excellent Ketten gag that is representative of his dry humor and his later cartooning style (earlier on his style wasn't so scratchy and impressionistic).

Comments:
I knew Maurice Ketten in the early 50’s, where he vacationed at a resort in Maine.